The head of the Palestinian Government Information Office in the Gaza Strip, Salama Maarouf, affirmed that 13 Palestinians have been killed and 28 others were injured since the start of Israel’s aggression against the blockaded Gaza Strip on Sunday.

Since Sunday, 150 Israeli air raids were carried out during which 80 buildings and institutions, including governmental and civilian facilities, were targeted.

Maarouf said that the deadly events broke out following the Israeli army ground incursion into Gaza, saying that the Palestinian resistance’s response was a natural reaction towards the Israeli aggression against the people of Gaza.

Targeting civilian areas is a clear war crime that needs an urgent international intervention, he underlined.
Israel Will Continue Airstrikes on Gaza ‘As Necessary’

The Israeli Cabinet reportedly decided, on Tuesday afternoon, to resume the offensive on the besieged Gaza Strip, following a meeting that lasted several hours.

According to a statement released by the Cabinet and published on Israel National News, the Political-Security Cabinet discussed events in the south. The cabinet heard reports, from the Israeli army and security sources, about the attacks and the widespread actions against the terrorist elements in Gaza, and instructed the army to continue its operations as necessary.

UN and Egyptian officials will reportedly visit Gaza on Wednesday.

Earlier on Tuesday, sources told Ma’an that the Palestinian factions agreed to a ceasefire agreement upon request by Egypt and the United Nations (UN.)

A total of seven Palestinians have been killed since Monday evening, while more than 30 were injured.
Resistance Forces in Gaza Announce Egyptian-brokered Ceasefire

A ceasefire deal was reached following intensive efforts exerted by the Egyptian side.

The ceasefire agreement came following two days of continued Israeli military aggression against Gaza, which left at least 14 people killed and dozens others injured, and caused the destruction of around 80 buildings, including governmental and residential buildings, media institutions, and agricultural lands across the Strip.

Israel closed Erez/Beit Hanoun crossing with Gaza, preventing anyone, including humanitarian cases, from crossing. They also barred fishermen from fishing in the sea.
Despite ceasefire talks: 1 Palestinian killed, 3 injured in Israeli airstrikes

One Palestinian was killed and at least three others were injured in Israeli airstrikes targeting the besieged Gaza Strip, on Tuesday afternoon, despite reports of ceasefire agreement.

Israeli warplanes carried out airstrikes targeting a group of Palestinians in the northern Gaza Strip, killing one Palestinian.

Sources added that Maarouf's death raises the death toll of Palestinians killed in the Gaza Strip, since Monday evening, to seven. More than 30 Palestinians were injured during the airstrikes.

Hebrew-language news outlets reported that talks of ceasefire were made.

Israeli warplanes had targeted and demolished three residential buildings, which were home to three Palestinian families, and another five commercial buildings, including a hotel, in Gaza City.

Another Israeli warplane had also fired a warning missile at a college building in the Tel al-Hawa neighborhood, west of Gaza City, causing material damages to the area.

Reports confirmed that Israeli warplanes also targeted agricultural lands in Gaza City, and in the central, northern and southern parts of the Strip.
Moreover, Israel had shelled the headquarters of the Hamas-affiliated al-Aqsa TV in Gaza City, and completely destroyed it, overnight Monday.
Army Kills Two Palestinians In Gaza

Dr. al-Qedra added that the soldiers also killed Khaled Riyad Ahmad Sultan, 26, who working on his own farmland, in the Salateen area, west of Beit Lahia, in northern Gaza, after firing a missile at his land.

Their deaths bring the number of Palestinians, killed by Israeli army and shells in Gaza, in less than two days, to six while dozens have been injured, some seriously.

Furthermore, the soldiers injured at least two Palestinians after the army fired missiles into an area near a local mosque, east of Rafah, in southern Gaza.

It is worth mentioning that the Israeli army carried out many strikes in several parts of the Gaza Strip, causing excessive property damage, including many buildings and roads.

An Israeli fighter-jet fired missiles into a residential building in the densely-populated ar-Rimal neighborhood, in the center of Gaza city.

The building, owned by members of the al-Yaziji family, was completely leveled to the ground, while many surrounded homes and properties were damaged.

The escalation came hours after the army targeted many residential neighborhoods, and various buildings, including government-run facilities, and a hotel west of Gaza city.
Palestinian Dies From Serious Wounds Suffered Monday

The Palestinian Health Ministry has confirmed that a young man died, on Tuesday at dawn, from serious wounded her suffered, on Monday evening, after Israeli soldiers fired missiles into an area, east of Rafah, in the southern part of the Gaza Strip. One Palestinian was killed by a shell fired from Gaza into Asqalan.

It said that the Palestinian has been identified as Mousa Eyad Abdul-Al, 22, from Rafah, and added that he succumbed to his serious wounds.

The Al-Quds Brigades, the armed wing of the Islamic Jihad in Palestine, said the Palestinian was one of its members.

He was injured when the Israeli Army and Air Force fired missiles and shells into several parts of the Gaza Strip, killing three Palestinians and wounding dozens, some seriously.

The slain Palestinians have been identified as Mohammad Zakariya al-Tatri, 27, and Mohammed Zohdi Odeh, 22, who were killed in Israeli airstrikes targeting the northern part of the Strip, in addition to Hamad Mohammad al-Nahal, 23, was also killed in an air strike that targeted the eastern part of Rafah city.

The army also fired many missiles into several parts of the Gaza Strip, including three that struck the Ansar Security Compound, west of Gaza city, destroying it and caused damage to many homes.

Many missiles also struck areas in the southern and western parts of Gaza city, in addition to Khan Younis, in the southern part of the coastal region, and in Deir al-Balah, in central Gaza.

In related news, a Palestinian, identified as Mahmoud Abdul-Hamid Abu Asba, 48, from Halhoul town, north of the southern West Bank city of Hebron, was killed by a mortar which was fired by Palestinian fighters in Gaza, into an area in Asqalan (Ashkelon).

The army initiated a series of air strikes, and army fired missiles and shells to secure the retreat of its undercover soldiers, killing five other Palestinians. Hamas fighters exchanged fire with the soldiers killing one of them.
Man killed by Palestinian shell in Ashkelon, 2 women critically wounded

A day after the Israeli military invaded Gaza in a flagrant violation of the ceasefire negotiated with Palestinian factions, Palestinian resistance fighters fired several hundred crude homemade shells into Israel.

One of these shells hit an apartment building in Ashkelon, killing a 48-year old man and wounding two women.

Update: Israeli daily Haaretz has reported that the man is reportedly from the southern West Bank city of Hebron, and not an Israeli citizen, and added that his identity is yet to be confirmed.

The shells fired by the Palestinian resistance rarely explode on impact, and cause damage only when they directly hit a building, putting a hole in the roof of the building about a foot in diameter. They can be deadly if they directly hit a person, but such direct hits are rare as they are fired blindly from Gaza into Israel with no way to aim them.

The Israeli bombs dropped on Gaza, in contrast, are highly sophisticated with laser-guided targeting and massive firepower. The bombs are each at least 250 lbs of explosives, and multiple bombs are dropped on each target. On Monday alone, Israeli bombs obliterated at least six multi-story buildings.

The escalation begun by Israel on Sunday came after more than seven months of weekly non-violent demonstrations by Palestinian civilians at the border fence – during which time no recognized Palestinian resistance groups fired shells into Israel, but over 200 Palestinians were killed with more than 20,000 wounded – 4,000 of whom were wounded with live ammunition fired by Israeli forces at the demonstrators.

The Israeli medical service Magen David Adom reported that they had treated 23 Israelis for light injuries from shrapnel and smoke inhalation, in addition to the two Israelis critically injured in the shelling that killed one in Ashkelon Monday night.

The Israeli Security Cabinet plans to convene on Tuesday to plan Israel’s next steps in this latest military assault on Gaza, in which 3 Palestinians were killed on Monday and 7 on Sunday, as well as dozens wounded from shrapnel, artillery fire and live ammunition fired from military bases along the Gaza-Israel border.

The Israeli military spokesperson responded to the shells fired in response to Israel’s invasion of Gaza on Sunday by blaming Hamas, claiming, “Hamas is leading the Gaza Strip towards destruction”.

The Israeli military stated that around 300 shells were fired from the Gaza Strip into Israel, 60 of which were intercepted by Israel’s ‘Iron Dome’ defense, in which surface-to-air missiles are fired to intercept the shells in mid-air. The vast majority of the remainder of the shells landed in open areas and the Negev Desert.
Israeli Missiles Destroy A Hotel In Gaza 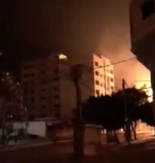 As the extensive Israeli air strikes continued over various parts of the Gaza Strip, the army fired missiles at a hotel, west of Gaza city, and destroyed it.

Media sources in Gaza said the Israeli Airforce fired many missiles into the Al-Amal Hotel, in the densely populated al-Mina’ Area, west of Gaza city.

The five-story hotel was leveled to the ground, before rescue teams and firefighters rushed to the area.

There have been no immediate reports of casualties among the Palestinians due to the bombing, but it also caused damage to surrounding buildings.

It is worth mentioning that the army also fired missiles at many residential buildings and homes in the Gaza Strip, in addition to targeting the Al-Aqsa Satellite TV station in Gaza.
12 nov 2018 Page 2
Israeli jets destroy building, 3 houses in Gaza
The Israeli army said that roughly 200 rockets had been fired from Gaza since Monday evening, injuring 21 Israelis, including one heavily injured, said to be an Israeli soldier.
Israeli warplanes destroy al-Aqsa TV headquarters

Serious damages were caused to neighboring homes that were earlier evacuated.

Hamas Movement strongly denounced “the barbaric aggression” that targets “the free voices exposing Israeli crimes and terrorism against the people of Gaza.”