The Ministry of Health Gaza abhors the ongoing massacres of Palestinians in the Gaza Strip by Israeli military forces, in which 65 people have been killed and 220 injured since the collapse of the ceasefire agreement on Tuesday – a collapse that lies squarely at the feet of the Israeli regime. Former Israeli Attorney General Michael Ben Yair today admitted that the Israelis staged the alleged Hamas breach on Tuesday in order to assassinate Al Qassam leader Mohammed Deif.

This deceitful outrage continues to be used as an excuse to carry out massive attacks on Gazan civilians – according to Israeli news agency ynet a few tons of explosives were used to destroy the building in which Mohammed Abu Shamala, Raed al-Attar and Mohammed Barhoum were killed in Rafah, killing at least five and injuring at least 50 additional civilians and completely destroying dozens of homes, leaving a crater the size of a residential block in their place – and the Gaza health services to pick up the pieces.

This deceitful outrage even served as an excuse to bomb preparations for a funeral in a graveyard, killing four people.

This deceitful outrage, and the ongoing murder and mutilation of scores of Gazans under its cover, is proof positive of the complete lack of good faith of the Israeli party in the Cairo negotiations for a lasting ceasefire.

The Ministry of Health Gaza cannot and should not be expected to mop up after gross Israeli excesses, which blatantly contravene international and humanitarian law, and fundamental human rights.

We demand the international community take immediate and concrete action to end the bloody carnage being wrought in Gaza by the lying and murderous Israeli regime.

We demand immediate steps be taken to end Israeli impunity for its clear and ongoing war crimes, leaving a trail of dead and injured from every part of the Gaza Strip to the doors of each and every overloaded emergency room still operational.

We demand an immediate end to the illegal, unjustified and crippling blockade that impairs the proper functioning of our health sector at the best of times, but that in times of crisis such as these, causes widespread and completely avoidable, unjustifiable and unnecessary pain, suffering and death to our people.
Israel strikes kill 10 in Gaza

Israel pounded Gaza on Saturday with scores of airstrikes, killing 10 Palestinians, mostly women and children, and bringing down a 12-story apartment building as Egypt called for new truce talks.

Since a previous round of frantic Egyptian diplomacy collapsed last Tuesday, shattering nine days of calm, 86 Palestinians and a four-year-old Israeli boy have been killed in the violence.

Israel on Saturday sent text messages, voicemails and leaflets warning Palestinians that "every house from which militant activity is carried out, will be targeted" and to stay away from "terrorists."

Israel has vowed no let-up until it can guarantee the safety of its civilians, while Hamas insists that Israel must end its eight-year blockade of the territory as part of any truce.

At least 2,103 Palestinians and 68 people on the Israeli side, all but four of them soldiers, have been killed since July 8. The UN says 70 percent of the Palestinians who have died were civilians. 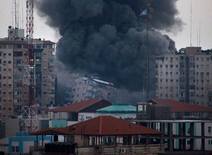 A massive Israeli airstrike in Gaza City Saturday leveled to the ground a building known as the al-Zafer apartment complex. Several nearby buildings were severely damaged. At least twenty-two people were badly wounded, and emergency workers are attempting to go through the rubbles to find bodies and to see if there are more survivors.

In a separate airstrike Saturday, Hussein Khaled Ahmad, 8, was killed along with his mother Nisreen Ahmad in an airstrike that hit their home in Deir al-Balah, in central Gaza mid-day on Saturday.

Also in Deir al-Balah Saturday, the body of Suheir Abu Mdein was recovered from under the rubble.

Air strikes continued in Deir al-Balah through the afternoon and evening on Saturday. One airstrike in Deir al-Balah hit the home of Abu Anwar Saliha near Yafa mosque, but there are no reports of casualties in that incident.

Air strikes were also reported in Rafah, the area which suffered the most severe attacks in the Israeli assault on Gaza, in the few days before the temporary ceasefire was declared.

Two people were reportedly killed by an airstrike in the al-Jneina neighborhood of Rafah, but they have not yet been identified.

These attacks followed an airstrike early Saturday morning that hit the home of the al-Dahrouj family, killing the mother, father, their 3-year old and 4-year old sons, and the father’s aunt.

Another Palestinian died of his wounds sustained in an earlier Israeli attack – he was identified as Salah Isleim.

Since Israel re-started its offensive on Gaza Tuesday after a week-long pause, more than 80 Palestinians have been killed and several hundred wounded, according to the Palestinian Ministry of Health.
Israel Retracts False Claim Regarding Alleged Hamas Rocket Base

Israeli officials retracted this morning their earlier claim on Friday that the rocket that killed a four-year-old child in Southern Israel was launched from an UNRWA school in the Gaza Strip.

The Israeli news reports that the rocket was launched from an UNRWA school were false. The same media outlets that rushed to report the incident without seeking confirmation from UNRWA are required and called upon to also report the Israeli army retraction. We also call on Israeli military spokespersons and other official sources to ensure the accuracy of their facts before going public.

UNRWA deplores the killing of all children during this conflict, including the killing of the four-year-old Israeli child yesterday and the hundreds of Palestinian children killed since the start of the current fighting. We call on all parties to ensure protection and care of children affected by armed conflict, in accordance with their obligations under international law.

UNRWA is working under incredible pressure right now in Gaza providing assistance to hundreds of thousands of people displaced by the fighting. Even during this extraordinarily difficult situation, we do our utmost to maintain the highest standards of neutrality for our staff, our property and in our installations.

On the record quote from Chris Gunness, UNRWA Spokesperson:

“I hope those news outlets that were so quick to publish the false and damaging claim -- that the rocket which killed an Israeli child came from an UNRWA school -- are equally swift in publishing the fact that the claim is totally baseless. Within hours of briefing journalists incorrectly, Israeli officials retracted their false claim. I call on Israeli spokespeople to check first, before making false allegations and I urge all journalists to check with me first before publishing inaccuracies and falsehoods. UNRWA condemns the killing of this first Israeli child in the latest conflict. We have also condemned the killing of nearly five hundred children in Gaza.”

UNRWA is a United Nations agency established by the General Assembly in 1949 and is mandated to provide assistance and protection to a population of some five million registered Palestine refugees. Its mission is to help Palestine refugees in Jordan, Lebanon, Syria, West Bank and the Gaza Strip to achieve their full potential in human development, pending a just solution to their plight. UNRWA’s services encompass education, health care, relief and social services, camp infrastructure and improvement, and microfinance.

Financial support to UNRWA has not kept pace with an increased demand for services caused by growing numbers of registered refugees, expanding need, and deepening poverty. As a result, the Agency's General Fund (GF), supporting UNRWA’s core activities and 97 per cent reliant on voluntary contributions, has begun each year with a large projected deficit. Currently the deficit stands at US$ 68 million.

The National Resistance Brigades, the military wing of the leftist Democratic Front for the Liberation of Palestine, said on Saturday that one of its fighters was injured in an Israeli airstrike in eastern Gaza.

The Brigades said in a statement that a fighter was injured in the airstrike with moderate injuries.

The group, along with al-Nasser Salah al-Din Brigades, also claimed responsibility for firing three 107 missiles at the Sufa Israeli military base outside of Gaza.

The Israeli military said on Saturday around 5 p.m. that 60 rockets had been fired into Israel since midnight.
Hamas signs Palestinian application for ICC membership

Hamas has signed a proposal for the Palestinians to apply to join the International Criminal Court at which legal action could be taken against Israel, a senior official of the movement said Saturday.

"Hamas signed the document which (Palestinian) president (Mahmoud Abbas) put forth as a condition that all factions approve, before he goes to sign the Rome Statute, which paves the way for Palestine's membership in the International Criminal Court (ICC)," Hamas deputy leader Mussa Abu Marzouq wrote on his Facebook page.

The Palestinian declaration came after two days of talks in Qatar between Abbas and Hamas supremo Khaled Meshaal, whose movement is the de facto ruler of the Gaza Strip.

Senior Palestinian negotiator Saeb Erakat told AFP that the Islamic Jihad, the second most powerful force in Gaza, "is currently the only Palestinian faction that has not signed" the document.

"They are studying the possibility of signing," he added.

According to Erakat, "the document calls on president Abbas to sign the Rome Statute to join the ICC, and indicates all the signatories assume responsibility for this membership."

Israel has signed but not ratified the Rome Statute.

Based in The Hague, the ICC opened its doors in 2003 and is the world's first independent court set up to try the worst crimes, including genocide and war crimes.

Since the July 8 outbreak of the latest war in and around Gaza, Israel and Hamas have accused each other of war crimes amid a massive Israeli assault that has killed more than 2,100 Palestinians and left more than 100,000 homeless.

68 Israelis have also died, all but four of whom were soldiers.

The Palestinians had in 2009 asked the ICC's prosecutor's office to investigate alleged war crimes and crimes against humanity committed by the Israeli military in Gaza.

There has so far been no probe as Palestine is not an ICC member state and its status as a state is uncertain in some international institutions.

However, the Palestinians in late November 2012 obtained the status of observer state at the United Nations, opening the door for an ICC investigation.
Schools shut for 500,000 Gaza students as Israeli bombing continues

Half a million schoolchildren in the Gaza Strip will be unable to start the fall semester this week as the coastal enclave reels from the effects of an ongoing Israeli assault that has damaged at least 277 schools so far.

Although schools were scheduled to open on Saturday, nearly one-third are still being used shelters for some of the 485,000 Gazans displaced by Israeli bombardment, including 100,000 who have been left homeless.

Palestinian Minister of Education Khawla al-Shakhshir told Ma'an on Friday that the although the new school year will begin on Sunday for 700,000 students in the West Bank, it has been "delayed until further notice" in Gaza.

The Deputy Minister of Education in Gaza Ziad Thabet told a Ma'an reporter that re-opening schools in Gaza depends on "evacuating schools that are used as shelters, providing other places for displaced families and preparing schools to receive students."

Thabet said that of the 141 government schools damaged in the assault, 22 of them were severely damaged while other schools merely required clean-up.

Thabet added that preparing schools to receive students would "technically need two weeks," but that the schedule was dependent on an end to the Israeli bombardment, which had killed more than 70 and injured hundreds in the previous four days alone.

He said that the ministry had coordinated with several local and international institutions to help repair and organize schools and provide the school year necessities, adding that the schools were also preparing to provide extensive psychological support programs for students.

The UN Office for Coordination of Humanitarian Affairs estimated on Thursday that 373,000 children will need direct and specialized psychological counseling after the end of the assault, while all students would require some form of psychological assistance.