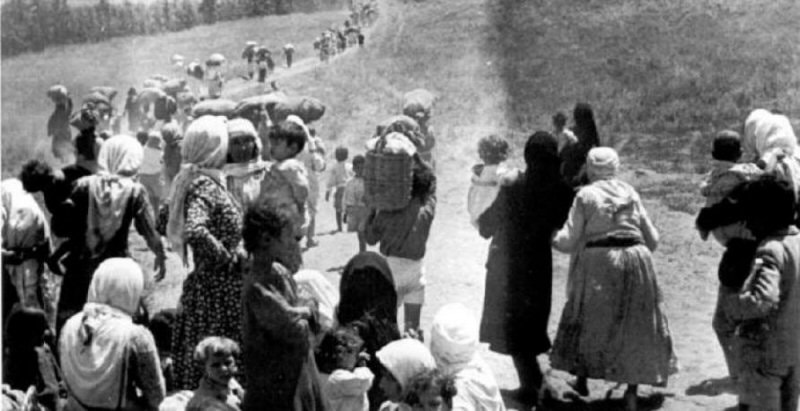 “As we are marking such a historic significant moment of our Palestinian history, the entire world, including our Palestinian territories, is facing the threat of Coronavirus, that has so far impacted lives of many world nations.

Therefore, we would urge our people, everywhere, to mark the Nakba anniversary by digital means such as social media, including Twitter, Facebook, Instagram and others”, a statement by the higher committee read.

Noteworthy, in previous years, Palestinians used to mark the Nakba by holding demonstrations, organizing exhibitions or concerts that all reflected on the Palestinian people’s plight.

The statement noted that the 72nd anniversary of the Nakba comes this year while the Israeli occupation, with the total support from the US, is going ahead with more restrictive measures against Palestinians in the internationally-recognized occupied East Jerusalem as well as the rest of the West Bank.

These measures are definitely part of the recently-announced US plan for peace, known as the deal of the century.

The higher committee also called on the Arab nations to uphold their responsibilities towards the Palestinian people’s cause by defying Israel’s current plans to annex the Al-Aghwar area of the Jordan Valley and put the whole West Bank under full Israeli control.

It also called on the United Nations to help the Palestinian people realize the right of return to their historical Palestinian homeland, from which they were expelled by Israel, back in 1948.

Regarding assistance to the Palestinian people, the committee demanded the United Nations Relief and Works Agency for Palestine Refugees, (UNRWA), continue providing vital services for the more than 5 million Palestinian refugees in the region. For this, it called on all donor countries to live up to their financial commitments to the UNRWA.

Back in May of 1948, Israeli paramilitary groups, attacked more than 450 Palestinian villages in historical Palestine, and engaged in a war with some Arab countries’ armies at the time.

The war led to the defeat of the Arab armies and the ensuing expulsion and mass displacement of more than 700,000 Palestinian residents to nearby Arab countries including Lebanon, Syria and Jordan. Many of those Palestinians fled to the Palestinian areas of the West Bank and Gaza Strip.

Right after that war, Israel was created on more than 70 percent of the lands of historical Palestine.

Currently, there are more than 5 million registered Palestinian refugees in the near east, including those in Lebanon, Syria, Jordan, the Palestinian West Bank and the besieged Gaza Strip.
13 may 2020
Marking 72 years of dispersion, Palestinians have doubled 9 times since the 1948 Nakba
According to the documentary evidence, the Israel occupation controlled 774 towns and villages and destroyed 531 Palestinian towns and villages during the Nakba. The atrocities of Zionist forces also included more than 70 massacres in which more than 15,000 Palestinians were killed.

The population of Palestine in 1914 was around 690,000; of whom only 8% were Jewish, said the PCBS. In 1948, the number of Palestinians in Palestine exceeded 2 million; 31.5% of them were Jews as the number of Jews doubled more than six times during this period.

Population estimates indicated that the number of population by the end of 2019 in the West Bank, including Jerusalem, was 3.02 million and around 2.02 million in Gaza Strip. As for the population of Jerusalem Governorate, it was about 457,000 people of which approximately 65% (about 295,000 people) live in those parts of Jerusalem which were annexed by Israeli occupation in 1967 (J1).

Hence, data showed that Palestinians represented 49.7% of the population living in historical Palestine, while Jews constituted 50.3% by the end of 2019.

Records of the United Nations Relief and Works Agency (UNRWA) for Palestine refugees reported on 2019 that the total number of Palestinian refugees was around 5.6 million, 28.4% of whom live in 58 camps (10 in Jordan, 9 in Syria, 12 in Lebanon, 19 in the West Bank and 8 in Gaza Strip).

Estimates, however, indicated that this is the minimum number of refugees since many of them are not registered. This number does not include the Palestinians displaced in the period from 1949 till the June 1967 war.

The UNRWA definition of refugees does not cover Palestinians who migrated or those who were displaced after 1967 because of the war and who were not registered refugees.
24 feb 2020
Wadi al-Natuf: A West Bank historical site ravaged by Israel

Early in 2004, the Israeli army took control of Wadi al-Natuf (or Natufian Valley), in the north Ramallah village of Shuqba, under the pretext it was state-owned.

The valley was quickly zoned as an industrial area. Israeli quarries took advantage of this decision and immediately began to pillage the rocky archeological site taking advantage of its rich soil.

Almost 3,000 dunums of land, some of it agricultural, was quickly ruined.

The archeological landscape of the valley has changed from the explosions and roads built in it. Two Israeli quarries were set up at the site to excavate the land with an Israeli army tower to protect them.

What has survived thousands of years of the historical Natufian Valley, was wiped out in just 16 years of Israeli control.

The Natufian culture existed thousands of years before Christ, according to historians. Its communities were the ancestors of the builders of the first Neolithic settlements of the region that founded the city of Jericho in the West Bank, the oldest inhabited urban area on earth.

The explosions in the valley for the quarrying factories caused damage to nearby homes. Residents complained to the Israeli military government but all their attempts to put a stop to the quarries have failed. Instead, they were not allowed to reach their lands near the quarries or to build on them, and anyone who builds there would have his building demolished.

The daily explosions in the mountains to shatter the rocks have damaged many homes in that area, said Adnan Shalash, head of Shuqba village council, not to mention the noise, disturbance and pollution they cause to the environment as a result of the dust they generate.

“All this is to force the residents to leave their homes,” he said, adding that the valley, which once was a scenic area, has become dangerous due to the big holes in the ground, some of them more than 15 meters deep.

“Previously, Wadi al-Natuf was an agricultural area with trees and pastures. It was the only recreational area for the village. Water would flow from Shuqba toward the western villages. Eventually, the Israeli occupation diverted the water to prevent it from reaching the nearby villages,” said Shalash.

Residents fear the nearby illegal Israeli settlements would eventually be linked to Wadi Natuf, which means it would become off to the Palestinians inhabitants of that area.

Shuqba has a population of 5000 people, who, like most Palestinian villages in the occupied West Bank, have to bear daily Israeli army harassment, including closure of roads that force residents to take longer and rougher alternative routes to reach their destinations.
26 jan 2020
Fateh IRC: Ethnically Cleansed Palestinians Like Victims of Nazi Occupation

The Fateh International Relations Commission said, in a statement commemorating the 75th anniversary of the liberation of Auschwitz, that the Palestinian people, ethnically cleansed by Jewish militias since 1948 and occupied by Israel since 1967, are like the victims of the Nazi occupation of Europe.

Fateh said that open or tacit acceptance of the International Holocaust Remembrance Alliance’s definition of anti-Semitism and the suppression of the legitimate critique of the State of Israel is tantamount to complicity with the war crimes and crimes against humanity perpetrated by apartheid Israel against the Palestinian people.

“Yad va-Shem, the World Holocaust Remembrance Center, stands just 1.3km away from the lands and the meager remains of the ethnically cleansed and massively massacred Palestinian village of Deir Yasin.