An Israeli military aircraft on Thursday evening targeted a group of Palestinian citizens in the northeast of the Gaza Strip and injured three of them.

A reporter for the Palestinian Information Center (PIC) said that an Israeli drone fired one missile at citizens in the east of Jabalia, causing injuries to three of them.

The wounded citizens were rushed to a hospital for medical assistance.

A spokesperson for the Israeli occupation army claimed the drone attacked Palestinians as they were intending to launch incendiary balloons from northern Gaza towards Israel.
Egyptian officials arrive in Gaza to negotiate truce, while Israel sends more troops to border
his first public appearance since the attack, on Wednesday evening. He said that the Palestinian resistance had made clear their intentions for peace, and that “The Occupying Power [Israel] has heard the message.” Now, he said, it is up to Israel to decide if they will go the way of war or peace.

The Egyptian officials are scheduled to be in Gaza overnight until Thursday. Israeli bombings, drone strikes, sound bombs and other weapons continue to be dropped on the Gaza Strip by the Israeli airforce.

The negotiators are from the Egyptian General Intelligence Service. They are said to have met with Israeli officials on Monday night, and had claimed at that time that a ceasefire was imminent – but Israeli bombardment continued without abatement through Tuesday and continuing into Wednesday.

On Friday, the weekly non-violent protest at the border between Gaza and Israel is scheduled to take place, and then on Saturday, Palestinians across Gaza, the West Bank and around the world will commemorate Palestinian Land Day with massive protests against Israeli land confiscation, imprisonment of the Gaza Strip and illegal and wanton use of military force against civilian populations.

Palestinian Land Day marks the anniversary of a non-violent protest in 1976, following the Israeli government’s seizure of thousands of acres of Palestinian land to annex for the Jewish state.

At that time, protests against the land confiscation were also met by deadly force imposed by the Israeli police, who killed six unarmed Palestinian protesters.

Since the Great March of Return began on March 30th, 2019, over 240 Palestinians have been killed, and over 28,000 wounded by Israeli forces.

According to Hebrew-language news outlets, after consulting with Israeli security officials, Netanyahu decided to send deploy reinforcement forces, including reservist soldiers, and artillery battalion to the Gaza borders.

Sources pointed out that the number of reinforcements forces would be tripled, in addition to a large number of additional military vehicles, bulldozers, warplanes, autopilot aircrafts, and air ambulances.

Earlier this week, Netanyahu was due to appear in person at the AIPAC, the largest pro-Israel lobby in the US, conference in Washington, however, cut his trip short to deal with recent escalation in Gaza, during which seven Palestinians were injured, 13 families were left homeless, and 30 buildings were completely destroyed.

In satellite address from Tel Aviv City, in central Israel, Netanyahu told the annual conference of AIPAC that Israel will "do whatever is necessary to defend our people and to defend our state."
Gaza: IOF teargases civilians, enters border area to bulldoze la

The Israeli occupation forces (IOF) on Thursday morning fired tear gas grenades at Palestinian workmen in the southeast of the besieged Gaza Strip as military bulldozers infiltrated into the area.

According to local sources, six armored bulldozers came from a military post behind the border fence in the east of Rafah and entered a border area inside Gaza to level raised plots of land.

During the incursion, Israeli soldiers launched a teargas attack on Gazan workmen collecting aggregate in the east of Rafah, particularly near the Israeli military post of Sofa.
Young man injured by Israeli gunfire in Gaza night protest

A Palestinian young man on Wednesday evening suffered a bullet injury during his participation in a nighttime protest staged in the east of Jabalia, north of the besieged Gaza Strip.

The health ministry in Gaza said that a young man was wounded by Israeli gunfire in east of Jabalia.

Many others also suffered from their exposure to tear gas fumes.

A group of Gazan young men last night managed to reach the security fence on the eastern border of Jabalia, where they set off fireworks, flashed laser beams at Israeli military posts and chanted national slogans.

A Palestinian youth was injured on Wednesday evening after being shot by the Israeli occupation forces (IOF) near Gaza border.

Eyewitnesses said that an IOF sniper shot a Palestinian youth in the leg east of al-Bureij refugee camp in the middle area of the Gaza Strip.

The injured young man was transferred to a local hospital for treatment and his injury was described as moderate.
27 mar 2019
Israeli warplanes wage dawn raids on Gaza

Israeli warplanes resumed its attacks at dawn Wednesday on the besieged Gaza Strip, amid efforts to solidify a ceasefire between the two sides.

According to local sources, airstrikes targeted several resistance sites at dawn in southern Gaza, with no reported casualties.

Several civilian homes and structures in the east of Rafah reportedly sustained damage after three missiles fired by a warplane destroyed a resistance site in ash-Shawka area.

Rafah city in Gaza was also plunged into darkness after the electricity network feeding the area sustained damage in aerial attacks.

Another resistance site in the east of Khan Younis was also destroyed in an Israeli air raid.
Israeli aerial attacks target Khan Younis in Gaza

A reporter for the Palestinian Information Center (PIC) that an Israeli warplane bombed the new seaport in the west of Khan Younis.

He also said that Israeli warplanes waged several airstrikes on resistance sites in the east of Khan Younis, especially al-Yarmouk site, adding that the attacks caused widespread panic among the civilians in Gaza.
Palestinian Youth Shot at Gaza Border

A Palestinian youth was shot and injured, by Israeli fire, to the east of al-Bureij refugee camp, in the central Gaza Strip, said medical sources.

An 18-year-old Palestinian was shot in the foot with a rubber-coated steel bullet after Israeli forces, stationed along the barbed-wire fence between Gaza and Israel, opened fire toward a group of Palestinians.
26 mar 2019
No ceasefire, more hard blows on Gaza, says Israeli source 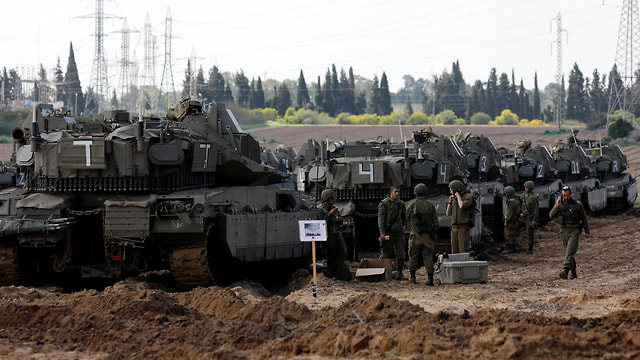 Official says IDF given 'the last word'; remarks come shortly after Netanyahu lands in Israel from Washington; urgent security meeting to be convened within next hour

A senior source in Jerusalem on Tuesday dismissed claims by Palestinian officials that a ceasefire has been reached between Israel and Hamas, warning that the Jewish state was planning further strikes on the terror group that rules the Gaza Strip.

"There is no agreement regarding a ceasefire, we are prepared to strike with even harder blows," the source said.

The remarks were made shortly after Prime Minister Benjamin Netanyahu landed in Israel after cutting short his trip to Washington following a meeting with President Donald Trump. Netanyahu was to convene a security meeting at Defense Ministry HQ in Tel Aviv shorty after landing.

"The prime minister has been updated on the latest developments during the flight and was in constant contact with the IDF chief of staff." the source said. "The instruction was to continue the strikes, the last word has to remain with Israel. Hamas has made various proposals for a ceasefire through intermediaries, and even offered to stop the clashes on the Gaza border," the source added.

Meanwhile, Hamas said they are cancelling all demonstrations along the security fence in light of “the security situation.”

During the meeting with Trump on Monday, Netanyahu said Israel would "respond forcefully to this wanton aggression," adding that, "after this meeting, I will return home ahead of schedule to lead the people of Israel and the soldiers of Israel."

Gaza militants fired at least 100 rockets into southern Israel and Israeli aircraft carried out hundreds of strikes in the Hamas-ruled territory late Monday and early Tuesday, in the latest round of cross-border fighting between the two sides.

The latest round of violence began early Monday when seven Israelis, including an infant, were wounded when a house in a moshav northeast of Tel Aviv was directly hit by a long-range rocket fired from Gaza by what the IDF said were Hamas operatives.

The Israeli military said it was a self-manufactured rocket with a range of 120 kilometers (75 miles), making it one of the deepest strikes ever carried out by Hamas.
Latest Israeli Bombing On Gaza Destroyed 30 Residential Units, And Caused Damage To 500 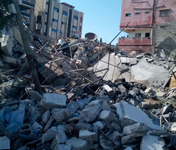 Palestinian Labor Minister Mofeed al-Hasaina has reported, Tuesday, that the Israeli bombing on Gaza, which started on Monday evening, has destroyed 30 civilian residential units, and caused damage to 500 others.

In a press briefing, al-Hasaina said that engineers and workers of the Labor Ministry have started since morning hours, Tuesday, assessing the damage caused by extensive Israeli bombings on Gaza.

He added that the teams started reopening roads that were closed by debris of bombed homes, and buildings.

Al-Hasaina also stated that the Ministry is conducting all needed efforts, including coordination with international institutions, to ease the suffering of the Palestinian people in the besieged and impoverished Gaza Strip.

Ad-Dameer added that this latest escalation is the most violent since Israel’s offensive on the Gaza Strip in the summer of 2014, and called on the International Community to end its silence and intervene to end these serious crimes against the civilian population.

It stated that the Israeli army started its latest offensive of the Gaza Strip on Monday evening, March 25th, 2019, by carrying out more than 50 air strikes, targeting not only sites used by army resistance groups, but also dozens of civilian homes, apartment and commercial buildings, in addition to agricultural lands and structures, causing serious damage and dozens of injuries.
PCHR: Israel’s air raids on Gaza displaced 13 families

The Palestinian Center for Human Rights (PCHR) said that the recent Israeli air raids on the besieged Gaza Strip displaced 13 Palestinian families of 70 individuals, including 44 children and 14 women.

According to the Center , those families spent their night outdoors in the cold.

Tentative clam has been reigning over the besieged Gaza Strip after the Israeli occupation army continued to attack Gaza last night and at dawn Tuesday despite the ceasefire that was announced by Egypt and UN.

According to the government media center in Gaza, 50 airstrikes in total were waged on Monday and Tuesday by Israeli warplanes on apartment buildings, civilian facilities, agricultural plots of land and resistance sites.

The Omar Ibn Abdul-Aziz Mosque in Beit Hanoun also went up in flames following an airstrike.
Israel continues to attack Gaza despite Egyptian-brokered ceasefire
operations room, that they would respect the ceasefire as long as the Israeli side did not violate it.

Earlier on Monday, five hours of Israeli aerial attacks caused widespread destruction in civilian areas and to infrastructure belonging to the resistance, and wounded many citizens.