Local sources told the Palestinian Information Center (PIC) that the Israeli occupation forces behind border fences showered the young protesters with tear gas grenades and opened fire at them as they were rallying in the east of Rafah (south) and Beit Hanoun (north).

Several protesters reportedly suffered from their exposure to tear gas fumes during the events.

A PIC reporter in Gaza said that the protesters torched tires, used loudspeakers to play national songs and sirens, and flashed laser beams at soldiers behind the border fences.

Organizers say such night rallies are aimed at creating confusion among Israeli forces on the border and pressuring Israel to lift its blockade on Gaza.

The night protests are part of a resurgence in border demonstrations following a brief lull after Egypt, Qatar and UN officials have failed to broker a long-term truce between Hamas and Israel.
2 mar 2019
Israeli Drones Fire Two Missiles Into Central Gaza 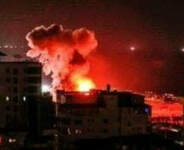 Israeli drones fired, on Saturday evening, two missiles into a site, near the perimeter fence, in the eastern area of Central Gaza. Several Palestinians, including medics, suffered the effects of teargas inhalation in Rafah.

Media sources said the missiles struck a structure between the cities of Deir al-Balah in central Gaza, and Rafah, in the southern part.

They added that the missiles caused serious damage, and a fire, but did not lead to casualties.

The Israeli army claimed it was retaliating to “flammable balloons” that were flown from Gaza into lands in colonies near the fence of the besieged coastal region.

In related news, many Palestinians suffered the severe effects of teargas inhalation near the fence in Rafah, after the soldiers fired a barrage of high-velocity gas bombs at them.

Most of the wounded Palestinians were treated by medics, while some of them were moved to Abu Yousef Najjar hospital, in Rafah, for further treatment.

Israeli military incursions inside the besieged Gaza Strip and near the "buffer zone," which lies on both land and sea sides of Gaza, have long been a near-daily occurrence.

The Israeli army also regularly detains and opens fire on unarmed Palestinian fishermen, shepherds, and farmers along the border areas if they approach the buffer zone, as the authorities have not made clear the precise area of the designated zone.

The practice has in effect destroyed much of the agricultural and fishing sector of the blockaded coastal enclave, which has been under an Israeli air, land and sea blockade for nearly 12 years.
1 mar 2019
PCHR: “Israeli Forces Wound 83 Civilians, including 23 Children, Woman, 3 Paramedics, and Journalist, In Gaza”

Report By The Palestinian Center For Human Right (PCHR).

On Friday evening, 01 March 2019, in excessive use of force against peaceful protesters on the 49th Friday of the March of Return and Breaking the Siege, Israeli forces wounded 83 civilians, including 23 children, a woman, three paramedics, and a journalist, in eastern Gaza Strip. The injury of three of the wounded civilians was reported serious.

According to observations by PCHR’s fieldworkers, the Israeli forces who stationed in prone positions and in military jeeps along the fence with Israel continued to use excessive force against the demonstrators by opening fire and firing tear gas canisters at them.

As a result, dozens of the demonstrators were hit with bullets and teargas canisters without posing any imminent threat or danger to the life of soldiers.
These new violations come one day after The United Nations Independent Commission of Inquiry to investigate the violations committed in the oPt, published their findings and results during the period from 30 March to 31 December 2018.

It should be noted that The UN Commission found that there were reasonable grounds to believe that Israeli soldiers violated the international humanitarian law and international human rights law during the demonstrations of the Great March of Return.

Moreover, these violations may amount to war crimes or crimes against humanity, and Israel should investigate them immediately.
On Friday, 01 March 2019, the incidents were as follows:

At approximately 15:00, thousands of civilians, including women, children and entire families, started swarming to the five encampments established by the Supreme National Authority of Great March of Return and Breaking the Siege adjacent to the border fence with Israel in eastern Gaza Strip cities.

Hundreds, including children and women, approached the border fence with Israel in front of each encampment and gathered tens of meters away from the main border fence, attempting to throw stones at the Israeli forces and firing incendiary balloons along the border fence.

Demonstrators chanted slogans, raised flags and, attempted to approach the border fence, set fire to tires and tried to throw stones at the Israeli forces.
Although the demonstrators gathered in areas open to the Israeli snipers stationed on the top of the sand berms and military watchtowers and inside and behind the military jeeps, the Israeli forces fired live and rubber bullets in addition to a barrage of tear gas canisters.

The Israeli shooting, which continued at around 17:30, resulted in the injury of 83 Palestinian civilians, including a child, a woman, a journalist, and  three paramedics.

Two of the wounded paramedics work at the Palestinian Civil Defense and the third one is a volunteer at PRCS, east of Rafah. The injury of 3 of the wounded civilians was reported serious.

In addition, dozens of demonstrators, paramedics and journalists suffered tear gas inhalation and seizures due to tear gas canisters that were fired by the Israeli forces from the military jeeps and riffles in the eastern Gaza Strip. Moreover, a PRCS ambulance was directly hit with a tear gas canister, east of Rafah.

The following table shows the number of civilian victims due to the Israeli forces’ suppression of the Great March of Return since its beginning on 30 March:

PCHR emphasizes that continuously targeting civilians, who exercise their right to peaceful assembly or while carrying out their humanitarian duty, is a serious violation of the rules of international law, international humanitarian law, the ICC Rome Statute and Fourth Geneva Convention. Thus, PCHR calls upon the ICC Prosecutor to open an official investigation in these crimes and to prosecute and hold accountable all those applying or involved in issuing orders within the Israeli Forces at the security and political echelons.

PCHR hereby condemns the excessive use of force and commission of crimes by the Israeli forces despite the prevailed calmness, believing it is as a result of Israel’s enjoying impunity thanks to the U.S. and so encouraging the Israeli forces to commit further crimes upon an official decision by the highest military and political echelons.

PCHR welcomes again the results of the international investigation into the Great March of Return; and:

1- Calls upon the UN Human Rights Council to adopt and ratify the report when it is discussed on 18 March at the 40th session of the Council.
2- Calls upon the Member States of the Human Rights Council to adopt a decision to renew the mandate of the Commission of Inquiry, in the light of the continuation of Return March and the ongoing violations of human rights and international humanitarian law by the Israeli forces during the period following the Committee’s work period.
3- Calls upon the High Commissioner for Human Rights to submit the report to the International Criminal Court.
4- Reiterates its call for the Prosecutor of the ICC to open an official investigation to these crimes, and to pursue and hold accountable those involved in the issuance of decisions in the Israeli army at the political and security level and who carried out these decisions.

PCHR calls upon Switzerland, in its capacity as the Depository State for the Convention, to demand the High Contracting Parties to convene a meeting and ensure Israel’s respect for this Convention, noting that these grave breaches constitute war crimes under Article 147 of the same Convention and Protocol (I) Additional to the Geneva Conventions regarding the guarantee of Palestinian civilians’ right to protection in the occupied territories
Public Document

A number of Palestinians were injured on Friday afternoon when the Israeli occupation forces heavily opened fire at the peaceful protesters taking part in the Great March of Return on Gaza border.

The PIC reporter said, quoting the Ministry of Health, that 17 Palestinians were injured by Israeli gunfire, while dozens others choked on tear gas.

The Ministry of Health said that a journalist and three paramedics were directly attacked with tear gas bombs.

Hundreds of Palestinians marched along the border between the Gaza Strip and the 1948 occupied Palestinian territories on the 49th Friday of the Great March of Return.

According to the Higher National Committee of the Great March of Return and Breaking the Siege, Friday's protests also celebrate the opening of Bab al-Rahma gate in Jerusalem after 16 years of closure.

The committee affirmed that the Great March of Return will continue until it achieves its goals, mainly breaking the 13-year-long blockade on the Gaza Strip.

For his part, Hamas's spokesman Hazem Qasem said that as the first anniversary of the Great March of Return is approaching, it is clear that the Palestinians in the Gaza Strip are more determined to break the siege by all possible peaceful means.

Since 30 March 2018, the Gazans have been demonstrating on a weekly basis along the eastern border calling for the return of Palestinian refugees expelled from their lands in 1948 and demanding an end to the Gaza blockade.

The Israeli occupation army has killed 267 protesters and injured over 27,000 others, nearly 500 of whom are in critical condition.
28 feb 2019
Israeli airstrikes target resistance site west of central Gaza

The Israeli warplanes on Wednesday evening bombed a resistance site several times in the southwest of Deir al-Balah in central Gaza, with no reported casualties.

A reporter for the Palestinian Information Center (PIC) said that an Israeli military helicopter fired two missiles at a post belonging to al-Qassam Brigades of Hamas in a coastal area located in the southwest of Deir al-Balah.

The Israeli occupation army claimed its aerial attacks were in response to the launch of balloons carrying incendiary materials towards Israeli areas, adding that one of the balloon landed onto a house and caused damage.
Gazan young man injured in night border protest

Dozens of young men flocked to flashpoints on the Gaza border at night and embarked on torching tires, using loudspeakers to play national songs and sirens, flashing laser beams at soldiers behind the border fence, and launching balloons carrying incendiary materials towards Israeli areas.

Organizers say the night rallies are aimed at creating confusion among Israeli forces behind the border fences.

The night protests are part of a resurgence in border demonstrations following a brief lull after Egypt, Qatar and UN officials have failed to broker a long-term truce between Hamas and Israel.
Israeli Warplanes Attack Area of Khan Younis

Local sources reported that Israeli warplanes bombed a site belonging to Palestinian resistance, in the west of Khan Younis, in the night.