Israeli airstrikes on Thursday targeted a group of burning kites lunchers in al-Zaitoun neighborhood east of Gaza. No casualties have been reported.

Every now and then clashes flare anew between Palestinian resistance and the IOF.
Palestinian killed by Israeli shell south of blockaded Gaza 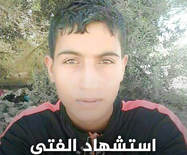 A Palestinian boy succumbed to his wounds on Thursday after he was hit by Israeli tank shell fired toward eastern Rafah, to the south of the blockaded Gaza Strip.

Israeli army fired a tank shell at two Palestinians when they approached the border fence hitting the two, who were rushed to Abu Youssef al-Najar hospital. One of them was pronounced dead shortly afterwards.

Sometime earlier, medical sources said one youth was in critical condition and the other sustained moderate injuries.

Hours earlier, the Israeli army stationed at the Gaza border had opened fire at four Palestinians who approached the fence injuring one, said to be 15 years of age, who was left bleeding on the ground until he was arrested by Israeli soldiers and taken into Israeli-occupied territory.
Army Injures Two Palestinians In Southern Gaza

Israeli soldiers seriously injured, on Thursday at dawn, two young Palestinian men near the “Return Camp,” east of Rafah, in the southern part of the Gaza Strip.

Media sources said the army fired an artillery shell at a group of Palestinians, seriously wounding two, before they were rushed to the European Hospital.

Two Palestinians were injured at daybreak Thursday, one reported in critical condition, from an Israeli tank shell fired at them when they approached the border with Israel east of Rafah, to the south of the blockaded Gaza Strip.

Local sources said the Israeli army fired a tank shell at two Palestinians when they approached the border fence hitting the two, who were rushed to Abu Youssef al-Najar hospital.

Medical sources said one was in critical condition and the other sustained moderate injuries.

Hours earlier, the Israeli army stationed at the Gaza border had opened fire at four Palestinians who approached the fence injuring one, said to be 15 years of age, who was left bleeding on the ground until he was arrested by Israeli soldiers and taken into Israeli-occupied territory.
27 june 2018
5 Palestinians injured by IOF gunfire in Gaza

Five Palestinians on Wednesday were shot and injured by Israeli occupation forces (IOF) during clashes that erupted between Palestinian youths and IOF soldiers south and north of Gaza. video

The PIC reporter said that three of the wounded were shot in the vicinity of al-Awda camp in Rafah, while a fourth man was shot east of Jabalya.

A fifth man was also shot at the eastern border north of Gaza Strip. Israeli Special Forces arrested him regardless of his injury.

Israeli Soldiers Abduct A Wounded Child, Injure Four Others, One Seriously, In Gaza

Israeli soldiers shot, on Wednesday evening, five Palestinians, including one child near Rafah and Jabalia, in the southern and northern parts of the Gaza Strip, and abducted the wounded child. One of the injured Palestinians suffered serious wounds.

Medical sources said the soldiers fired live rounds at protesters on Palestinian lands near the ‘border fence’, east of Rafah, in the southern part of the Gaza Strip, wounding four of them.

They stated that the wounded Palestinians were rushed to Abu Yousef Najjar Hospital and added that one of them suffered life-threatening wounds.

Furthermore, the soldiers abducted a child, 15 years of age, after shooting him on Palestinian near close to the fence, east of Jabalia, in northern Gaza.
Injured Palestinian kidnapped by IOF near Gaza border

The Israeli Occupation Forces (IOF) kidnapped on Wednesday evening a Palestinian young man after being shot and injured near the northern border of the Gaza Strip.

An IAF aircraft hits a vehicle belonging to one of the commanders of Hamas’ military wing in the Neuseirat refugee camp in the central strip; 13 rockets launched at Gaza vicinity communities shortly afterwards, three intercepted by the Iron Dome system. ‘A bombing will be met with a bombing,’ Hamas says in a statement.

The IDF bombed a vehicle belonging to one of the commanders of Hamas’ military wing in the Neuseirat refugee camp in the central Gaza Strip on Tuesday night. Shortly afterwards, 13 rockets were fired at Gaza border communities.

At least three of the rockets were intercepted by the Iron Dome air defense system. There were no reports of injuries.

The IDF confirmed in a statement issued early Wednesday that the army attacked “a vehicle belonging to a Hamas operative in a cell launching explosive and incendiary balloons” with an aircraft and a tank.

The IDF said it also struck two of the organization’s observation posts in the northern Gaza Strip. “At the same time,” the IDF Spokesperson’s Unit said in its statement, “the Hamas terror organization led a high-trajectory fire attack on the State of Israel. Hamas will pay for the terror and instability.”

The first Code Red siren sounded at 1:40 am at a kibbutz in the Sha’ar Hanegev Regional Council. The IDF Spokesperson Unit said one rocket had been fired. Residents reported hearing an explosion.

Throughout the night, sirens sounded in other communities in the Sha’ar Hanegev, Hof Ashkelon, Eshkol and Sdot Negev regional council. At 4:01 am, a siren sounded in the city of Sderot as well.

The IDF Spokesperson’s Unit said a total of 12 rockets and mortar shells had been fired into Israel.

A Palestinian source told Ynet that the attacked vehicle was completely destroyed, but that there were no injuries in the strike and that the driver escaped unharmed. The strike took place in the western side of the Nuseirat refugee camp. Hamas closed off the area and stopped people from approaching it.

At first, the IDF refused to confirm that Israel was behind the strike, saying: “We won’t address foreign reports.” Hamas, however, rushed to announce that “a bombing will be met with a bombing.”

In another statement issued later on, Hamas said: “The Israeli escalation and the attacks on protestors and on military operatives led to a quick response from the resistance, as part of its complete readiness to carry out its mission to defend the Palestinian people.”

An incendiary balloon dispatched from the Gaza Strip was found Tuesday evening in Kibbutz Dorot in the Sha’ar Hanegev Regional Council. There were no injuries. Earlier, an IAF aircraft attacked a vehicle used by a cell of incendiary balloon launchers in the northern strip.

The tensions around Gaza have increased in recent weeks, as Gazans keep sending incendiary balloons and kites into Israel, causing more and more fires. The IDF has fired warning shots near the cells responsible for the kites and balloons and has even bombed Hamas targets, usually without causing any injuries. The terror organization, for its part, has stepped up its responses to the strikes and created the equation that “a bombing will be met with a bombing.”
Israeli Army Fires Missiles At Car, Observation Tower, In Gaza

The Israeli Air Force fires at least one missile at a Palestinian car, in addition to attacking an observation post run by an armed resistance group, in Central Gaza.

Media sources in Gaza said the soldiers fired a missile at a Palestinian jeep in the Nusseirat refugee camp, in Central Gaza, causing damage but no injuries.

They added that the army also fired flares while flying at a law altitude over the Gaza Strip.

The Israeli army said it also fired missiles at an observation post, reportedly after several Palestinians flew “incendiary balloons” across the border fence.

The PIC reporter said that Israeli airstrikes fired three missiles towards a group of Palestinians east of al-Shujaiya neighborhood and a fourth rocket towards a jeep car east of al-Tufah neighborhood east of Gaza.

A third airstrike targeted Palestinians east of Gaza and a fourth one north of the besieged coastal enclave.

Israeli military bulldozers on Tuesday morning moved dozens of meters into the eastern corners of Khan Younis and Gaza city, in the blockaded Gaza Strip.

Israeli military incursions near the border fence separating Gaza from territories occupied in 1948 have long been a near-daily occurrence.

The Israeli army also regularly detains and opens fire on unarmed Palestinian fishermen, shepherds, and farmers along the border areas.

The practice, often carried out under the security pretext, has destroyed much of the agricultural harvest of the blockaded coastal enclave.
24 june 2018
Ministry of Health: 131 Palestinians Killed, Over 14 Thousand Injured in Great March of Return

The Palestinian Ministry of Health (MOH) in Gaza has issued an updated count of Palestinian casualties since the “Great March of Return” began on March 30th, in the besieged Gaza Strip.

The Ministry announced, late Sunday, that the total number of Palestinians killed by Israeli forces is 131, including 15 children and a woman, since the weeks-long massive demonstrations began.

The total number of injuries and gas inhalation was 14,811, of which 6,836 were treated in the field at medical points and 7,775 were treated in hospitals. Among the injured were 2,525 children and 1,158 women, according to the statement.

The ministry said that two paramedic, including a female paramedic were killed, and 229 medics were injured with live ammunition and tear-gas suffocation, while 39 ambulances were partly damaged.

Meanwhile, the Forum of Palestinian Journalists in the Gaza Strip said that two journalists, Yasser Murtaja and Ahmad Abu Hussein, were killed during the protests.

The forum added that 175 journalists were injured since the beginning of the marches.
3 Palestinians injured as Israeli military strikes besieged Gaza

Three Palestinians were left injured on Sunday evening in an Israeli airstrike on the blockaded Gaza Strip.

Sometime earlier, an Israeli offensive targeted a motorcycle in Gaza.

The Israeli military spokesman claimed the army targeted a vehicle used in flowing kites and incendiary balloons from southern Gaza toward Israeli settlements adjacent to the border area.

Over the past few days, a series of fires broke out in Israeli settlements on the Gaza border after Palestinian anti-occupation protesters unleashed helium-filled balloons in response to Israeli aggressions the Great March of Return protests, which have been ongoing since March 30.
Israeli Missile Injures Three Palestinians In Gaza

Palestinian medical sources have confirmed, on Sunday evening, that three residents were injured after an Israeli drone fired a missile at them while riding a motorcycle east of the Zeitoun neighborhood, east of Gaza city.

The sources said the three Palestinians were rushed to the Shifa Medical Center in Gaza city, suffering moderate-to-severe wounds.

The Palestinians were targeted by the drone in Malka Junction area, in the Zeitoun neighborhood, in Gaza city.

Furthermore, the army fired a tank shell at a site, east of the al-Boreij refugee camp in central Gaza, causing damage.

On its part, the Israeli army claimed it fired a missile at what was described as a “wagon transporting incendiary balloons,” wounding three Palestinians.
Israeli gunboats strike Gaza seashore

Israeli warships moved into Gaza’s seashores and unleashed four shells. No injuries have been reported in the assault.

A Palestinian young man was proclaimed dead at dawn Sunday after he succumbed to a bullet injury he sustained last Friday during his participation in a March of Return protest staged on the Gaza border.

According to a spokesman for the health ministry, the young man is 29-year-old Osama Abu Khater. He died of a bullet injury in his abdomen during his presence in a border area east of Khan Younis.