The Israeli occupation forces on Monday informed the Palestinian Liaison in the besieged Gaza Strip about the names of three young men killed by the Israeli army last night near Gaza’s southeastern borders.

Maher Abu al-Ouf, from the Palestinian Crossings and Borders Authority, said that the Israeli authorities revealed the identities of the three Palestinians killed by the Israeli army east of Khan Younis and Rafah, in the southern Gaza Strip. 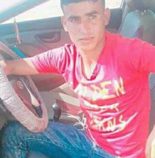 The three casualties are: Atiya Mohammed al-Amawi, Yusuf Ahmed al-Amawi, both in their twenties and from Khan Younis, along with 16-year-old minor Yusuf Jasser Abu Jazar, from Rafah.

Abu al-Ouf added that the occupation authorities handed over three other young men arrested by the Israeli military east of Rafah while they were with slain Abu Jazar.

The Israeli authorities also announced their decision to withhold the bodies of the three slain Palestinians until further notice.

Overnight the Israeli army claimed responsibility for the murder of three Palestinians and the abduction of three others allegedly for attempting to infiltrate the Gaza Strip into Palestinian territories occupied in 1948.
Israeli Soldiers Abduct Ten Palestinians In The West Bank

The Palestinian Prisoners’ Society (PPS) has confirmed that Israeli soldiers abducted, on Monday at dawn, ten Palestinians from their homes in several parts of the occupied West Bank, including student of Birzeit University who was taken prisoner for a campus dorm.

The Nablus office of the PPS, in northern West Bank, said the soldiers invaded and searched homes in Beita town, south of the city, and abducted two former political prisoners, identified as Nassr Sabri Hamdan and Ja’far Jaghoub, in addition to a young man, identified as Nasser Fawzi Abu Khalil.

It added that the soldiers also invaded Beit Dajan village, east of the city, searched homes and abducted a young man, identified as Ayman Ribhi Hanani.

In addition, the soldiers invaded dorms of Birzeit University, near the central West Bank city of Ramallah, and abducted a student, identified as Majdi Ibrahim, from Jenin city in northern West Bank.

In Qalqilia, in northern West Bank, the soldiers invaded and ransacked homes in ‘Azzoun town, east of the city, and abducted a former political prisoner, identified as Ahmad Mustafa Radwan, in his twenties.

Furthermore, the soldiers invaded homes in Teqoua’ town, east of Bethlehem, and abducted three Palestinians during violent searches of homes.

The abducted Palestinians have been identified as Khaled Sabah, 19, Zakariya Mohammad Sabah, 19, and Atiya Suleiman Sabah, 19.

In the Gaza Strip, Israeli soldiers, stationed in military bases and towers across the border fence, fired many live rounds at Palestinian farmers and workers, east of Khan Younis, in the southern part of the coastal region.

Israeli occupation forces (IOF) on Sunday evening announced killing of three Palestinians and arresting a fourth man, in two separate attacks, at the pretext of attempting to cross the security fence south of Gaza Strip.

The IOF claimed that the Palestinians managed to cross the separation fence and throw bombs at IOF troopers who immediately shot them dead.

Local sources reported hearing shooting and seeing light bombers, coming from the Israeli side, east of Rafah and Khan Younis. No further information were reported yet.

Palestinians say Israel has used excessive force, as its use of live fire has drawn international criticism

Israeli troops shot and killed three Palestinians along the border with the Gaza Strip in two separate incidents on Sunday, the Israeli military said.

The shootings follow a month of violence along the Israel-Gaza border, where Palestinians have been holding protests every Friday pressing for the right of return for refugees and their descendants to what is now Israel.

In the first incident on Sunday, two men "attempted to infiltrate" into Israel from the southern Gaza Strip, the military said in a statement. Soldiers shot and killed one of the men, and the other was wounded and held for questioning.

In the second incident, the army said two militants who managed to cross the fence "hurled explosive devices" at Israeli soldiers, who shot them dead. There was no claim of responsibility from any militant group in Gaza.

Israel has refused any right of return for Palestinians who were expelled or fled and became refugees when the state of Israel was established in 1948 - in what Palestinians refer to as the Nakba (the catastrophe) - fearing that it would lose its Jewish majority.

The Palestinians say Israel has used excessive force, and its use of live fire has drawn international criticism.

Israel says that it is defending its sovereign border, including nearby communities, and that its troops target only instigators. Israel accuses Hamas, which is sworn to Israel’s destruction, of trying to carry out attacks under the guise of the mass protests.
There was no immediate comment from Hamas in Gaza.

Israeli forces have killed 42 Palestinians since protests began on 30 March and about 2,000 have been wounded by gunfire. No serious casualties have been reported on the Israeli side.

The Gaza Health Ministry said that three Palestinians were also killed on Friday and 200 were wounded by Israeli gunfire, while a fourth died of his wounds on Saturday.
Israeli army launches incursion into Gaza Strip

Israeli army vehicles and patrols showed up on the borderland to escort the bulldozers.

The Israeli occupation forces positioned at the border fence east of Khan Younis and Gaza in the morning hours heavily opened fire at Palestinian farmers working in their agricultural lands close to the fence with no injuries reported.

In another context, the Israeli occupation forces on Sunday morning arrested a Palestinian citizen who allegedly tried to cross the border fence east of Gaza city. Other three Palestinians were arrested on Saturday evening east of Khan Younis under the same pretext.
Israeli Soldiers Abduct A Palestinian East Of Gaza

Media sources said the soldiers cuffed and blindfolded the man, who remained unidentified as the times of this report, and took him to an unknown destination.

In related news, the soldiers fired many live rounds at Palestinian farmers, on their lands, east of Gaza city.

The shots came from soldiers, stationed on towers in Nahal Oz military base, across the border fence, east of Gaza city.
27 apr 2018
Update: “Israeli Army Kills Three In Gaza, Injures 995”

The Palestinian Health Ministry has confirmed that Israeli soldiers killed, Friday, three young Palestinian men, and injured more than 995, including at least 178 who were shot with live fire.

It stated that the first Palestinian who was killed by Israeli army fire, Friday, has been identified as Mohammad Amin al-Moqyd, 21, from Gaza city. His body was moved to the Shifa Medical Center.

The Ministry added that the soldiers also killed Abdul-Salam Bakr, 29, from Khuza’a town, east of Khan Younis, in the southern part of the Gaza Strip.

The third Palestinian who was killed by army fire has been identified as Khalil Na’im Atallah, 22, from Gaza.

In addition, the Health Ministry said the soldiers injured 995 Palestinians, including many who suffered serious wounds.  It added that 178 of the wounded were shot with live fire.

On Friday at night, Israeli war jets fired missiles at a side, believed to be run by a Palestinian resistance group, west of Deir al-Balah in central Gaza.

The army also fired missiles at two Palestinian fishing boats in Gaza port. Media sources in Gaza said the boats are parts of preparations for welcoming an upcoming flotilla to challenge the illegal Israeli siege on Gaza.

The ongoing ‘Great Return March’ protests which started on Palestinian Land Day (March 30th) are meant to bring attention to the fact that millions of Palestinians are imprisoned in the Gaza Strip, unable to return to their homes in what is now Israel. Palestinians make up the largest refugee population on earth.

Israeli troops again opened fire on the unarmed protesters, as they have done each Friday since the protests began on March 30th.

An international outcry against the continued shooting of civilian protesters has not reached the US, where politicians have been largely silent on the issue.

Irish and South African politicians have been leading the call for justice for Palestinians, calling the Israeli government an ‘apartheid state’ much like South Africa in the 1980s.

In response to Israel’s fifth straight week of attacking unarmed demonstrators at the border, the UN Commissioner for Human Rights, Zeid Ra’ad al-Hussein, issued a statement that, “The loss of life is deplorable, and the staggering number of injuries caused by live ammunition only confirms the sense that excessive force has been used against demonstrators – not once, not twice, but repeatedly.”

Updated From:
Israeli forces gun down Palestinian protesters in Gaza, Killing 3 and Wounding 611

Thousands of Palestinians gathered at the Gaza-Israel border today in several locations in the north, east and south of Gaza, for the fifth week of Friday protests.

Three Palestinians were killed today, and 611 injured by Israeli forces stationed at the border firing both live ammunition and so-called ‘less-than-lethal’ weaponry.

According to Ashraf al-Qidra of the Palestinian Ministry of Health, 18 medics and medical personnel were among those wounded on Friday.

al-Qidra added that Israeli forces  specifically targeted medical service points twice with an unidentified gas east of the al-Bureij refugee camp in central Gaza. This appeared to be a new type of gas that caused those who inhaled it to suffer from severe convulsions. A number of these victims had to be hospitalized.

The demonstration is called the ‘Great Return March’, and is meant to bring attention to the fact that millions of Palestinians are imprisoned in the Gaza Strip, unable to return to their homes in what is now Israel.

Palestinians make up the largest refugee population on earth.

Israeli troops again opened fire on the unarmed protesters, as they have done each Friday since the protests began on march 30th.

An international outcry against the continued shooting of civilian protesters has not reached the US, where politicians have been largely silent on the issue.

Irish and South African politicians have been leading the call for justice for Palestinians, calling the Israeli government an ‘apartheid state’ much like South Africa in the 1980s.

In response to Israel’s fifth straight week of attacking unarmed demonstrators at the border,  the UN Commissioner for Human Rights, Zeid Ra’ad al-Hussein,  issued a statement that, “The loss of life is deplorable, and the staggering number of injuries caused by live ammunition only confirms the sense that excessive force has been used against demonstrators – not once, not twice, but repeatedly”.

The Israeli occupation army waged air raids late Friday night on a resistance post in the Gaza Strip after its warplanes bombed earlier two anti-siege boats docking at the harbor of Gaza City.

Local sources told the Palestinian Information Center that Israeli warplanes fired at least six missiles at a site belonging to al-Qassam Brigades of Hamas in the western area of Deir al-Balah, central Gaza.

The airstrikes caused resounding explosions that were heard throughout the besieged enclave. Luckily, no one was injured in the aerial attack.

Earlier, a warplane bombed and destroyed two boats in Gaza port, with no reported casualties.

The National Commission for Breaking the Siege and Reconstructing Gaza said that the bombed boats were prepared to carry a group of students and patients from Gaza as part of anti-siege activities aimed at confirming the population’s right to a decent life without blockade and a seaport connecting them with the world.

The commission condemned the destruction of the boats as a cowardly crime and Israeli persistence in its inhumane practices against Gaza and terrorizing all international voices and appeals to end its blockade on the population.
25 apr 2018
Israeli army launches limited incursion into besieged Gaza

Four Israeli military bulldozers crept into the eastern corners of Jabaliya, on way to the southern Gaza borders.

Israeli military incursions inside the besieged Gaza Strip and near the border fence have long been a near-daily occurrence.

The Israeli army also regularly detains and opens fire on unarmed Palestinian fishermen, shepherds, and farmers along the border areas.