Israeli soldiers fired, on Wednesday at dawn, at least two artillery shells into Palestinian lands, close to the border fence east of Khuza’a town, east of Khan Younis, in the southern part of the Gaza Strip, wounding five Palestinians, including one who suffered a serious injury.

Media sources said the soldiers, stationed across the border fence east of Khuza’a town, fired at least two shells at Palestinians who approached the border fence, wounding five; one seriously.

They added that the soldiers also fired several live rounds at Red Crescent ambulances and medics who rushed to the scene.

On Tuesday evening, the soldiers shot and injured five Palestinians, including one child, during a nonviolent procession near the border fence.

The army also fired artillery shells into a site, east of the al-Boreij refugee camp, in central Gaza.

Israeli military incursions inside the besieged Gaza Strip and near the "buffer zone" which lies on both land and sea sides of Gaza, have long been a near-daily occurrence.
14 apr 2018
Israeli forces open fire on fishermen off Gaza coast, forcing them to return to shore

Israeli naval forces have reportedly barred Palestinian fishermen from sailing off the coast of the northern Gaza Strip in recent days, according to a Saturday report from the official Palestinian Authority (PA)-owned Wafa news agency.

Wafa reported that naval forces barred fishermen on Saturday from sailing off the northern Gaza shores and forced them to return to coast, which fishermen reportedly say has been a daily occurrence recently.

“They said that the navy opened fire at fishermen across from Sudaniya shores in the northern Gaza Strip leading the fisherman to return to the marina,” Wafa reported, adding that no injuries were reported.

The Israeli army regularly detains and opens fire on unarmed Palestinian fishermen while sailing off the coast of Gaza.

As part of Israel's blockade of the coastal enclave since 2007, the Israeli army, citing security concerns, requires Palestinian fishermen to work within a limited "designated fishing zone," the exact limits of which are decided by the Israeli authorities and have historically fluctuated.
12 apr 2018
Palestinian killed, another injured in Israeli aerial attack on Gaza

One Palestinian citizen was killed and another was wounded during an Israeli air raid at dawn Thursday on a resistance post east of the Gaza Strip.

An Israeli drone fired two missiles at a resistance post to the east of al-Shuja’iyya neighborhood, leading to the killing of 31-year-old Mohamed Hajila and the injury of another citizen, the PIC reporter said, adding that the casualties were transferred to al-Shifa Hospital

This airstrike was preceded by similar aerial attacks on Abu Jarad military site, which belongs to al-Qassam Brigades of Hamas, in Gaza City.

Spokesman for the Israeli occupation army Avichay Adraee claimed the airstrikes were in response to the detonation of an explosive device near a military vehicle during an incursion into eastern Gaza on Wednesday morning.

The Israeli army already bombed a resistance observation post and agricultural plots of land east of Gaza City with about 20 artillery projectiles in response to the same alleged explosion of an explosive device.

After Israeli tanks spent the day on Wednesday firing artillery shells at numerous sites in northern and eastern Gaza, the Israeli military stepped up its assault on the coastal enclave Wednesday night with bombs dropped by the Israeli airforce which killed one Palestinian and injured another.

The Palestinian who was killed was identified as Mohammad Hjeila, 31.

He was hit by a bomb dropped by an Israeli fighter jet Wednesday night east of al-Shejaiyya neighborhood, in the eastern part of Gaza City.

Hjeila was with the al-Qassam Brigades, the armed wing of the Hamas party. His brother, Adham Hjeila, had been killed by Israeli forces in 2004.

The Israeli military claimed that during this invasion, an explosive device exploded near one of the militarized bulldozers.

Israeli forces stationed at the border then fired at least five shells east of Gaza City in al-Shejaiyya and al-Zaytoun neighborhoods. A Palestinian was moderately wounded by the shelling and taken to Shifa Hospital in Gaza City.

Later in the evening, the Israeli military sent in fighter jets to drop bombs in the same areas, which they claimed were being used as training sites for resistance fighters. According to Israeli media sources, Palestinian resistance fighters tried to shoot at the jets with guns. One bullet allegedly hit the roof of an Israeli house in a town adjacent to the border with Gaza, causing very slight damage.

In Gaza, dozens of houses near the site of the bombing had their windows blown out due to the ‘sonic boom’ from the bomb.

This escalation by the Israeli military follows two weeks of non-violent protests by Palestinians in Gaza along the border fence with Israel. The Palestinians protesting at the fence are asking for an end to the decade-long siege of the tiny coastal strip, and the right of return for Palestinian refugees.

Through the siege, Israeli forces, who control the land, sea and air of Gaza, have prevented essential goods like fuel, medicine, building materials, maintenance equipment for electric and sewage plants, vehicles, books, medical equipment and many food items from entering Gaza. Palestinians have also been unable to leave Gaza for the past ten years, apart from very rare exceptions in which Palestinians who apply for a permit from Israel and wait for months or even years are sometimes allowed to leave.

Two Israeli military bulldozers and a troop-carrier moved dozens of meters into the eastern corners of Khuza’a town, to the east of Khan Younis, and leveled Palestinian lands near the border fence.

Israeli engineering officers showed up near the border fence and carried out maintenance works.

At the same time, a number of Palestinian protesters have come within the reach of the infiltrating vehicles, before they were shot by the occupation patrols.

Israeli artilleries on Wednesday morning targeted Palestinian resistance sites to the east of al-Zaytoun neighborhood, in Gaza City, with 15 shells.

The Israeli occupation claimed the offensive comes in response to an explosive device fired at Israeli military bulldozers that launched a limited incursion into Gaza’s borderland. The occupation army held Hamas responsible for the alleged explosion.

A PIC news correspondent said that Israeli bulldozers moved into the Gaza Strip at the early morning hours in an attempt to level more Palestinian land.

Such infiltrations are considered by the Palestinian people and resistance flagrant violations of the ceasefire accord struck in the wake of the 2014 Israeli offensive on the blockaded coastal enclave.

The PIC reporter said that two missiles were fired at a resistance site in Beit Lahia, while a third was fired at another site east of Jabalia in the northern Gaza Strip.

Panic prevailed among the Palestinian citizens living in the targeted areas and some houses were partially damaged, he added.

Israeli warplanes every now and then launch air raids on different sites in the Gaza Strip blatantly breaching the Egypt-brokered truce signed between Israel and the Palestinian resistance in 2014.

The Israeli army claimed the aggression comes in response to an attempted attack by Palestinian gunmen targeting an Israeli patrol. No injuries were reported in the alleged attack.

Three Palestinian fishermen were wounded by Israeli gunfire while fishing at the Gaza Sea on Thursday morning.

Ashraf al-Qidra, the health ministry spokesman in Gaza, said that Israeli gunboats fired at the Palestinian fishermen’s boat while sailing off the coast of Gaza.

Israeli forces, Wednesday, opened fire on shepherds while they were grazing their livestock in pastures along Gaza borders with Israel, said WAFA sources.

The shepherds were forced to leave the pastures located along the borders in fear of their lives. No injuries were reported.
2 apr 2018
Israeli Army Injures Eleven Palestinians In Gaza 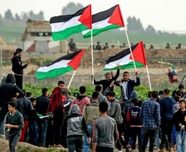 Palestinian medical sources have confirmed, Sunday, that Israeli soldiers shot at least eleven Palestinians with live fire, including one who suffered a serious injury, while dozens suffered the effects of teargas inhalation, after the army attacked protesters near the border fence, in the eastern part of the Gaza Strip.

Five Palestinians were shot with live fire in Abu Safiyya area, east of Jabalia, in the northern part of the Gaza Strip, and were rushed to the Indonesian Hospital, in nearby Beit Lahia, while many others suffered the effects of teargas inhalation.

One Palestinian was suffered a life-threatening injury, after an army sharpshooter shot him in the head, east of Khan Younis, in the southern part of the Gaza Strip.

It is worth mentioning that the army has killed 16 Palestinians, and injured thousands, in the Gaza Strip since Friday, March 30th. Medical sources in Gaza said dozens, and possibly hundreds, of the wounded Palestinians could end up with permanent disabilities.

A Palestinian deaf child was shot and seriously injured by Israeli gunfire east of Khuzaa town to the east of Khan Younis city in the southern Gaza Strip on Sunday.

The spokesman of the Palestinian Health Ministry, Ashraf al-Qudrah, affirmed that the boy sustained a critical injury in the head and that he was transferred to the European Hospital in Gaza where he is receiving treatment.
Page:  8 - 7 - 6 - 5 - 4 - 3 - 2 - 1
Truce violations  List of names  Pictures of martyrs