23 aug 2019
Injuries increased from Israeli gunfire at Gaza border protests as the day progressed
to return to their homes they were kicked out from when Israel was created on their land and in their homes in 1948.

Several hundred Palestinians were killed and thousands injured from Israeli gunfire since the start of the March of Return protests on March 30 of last year.

Israeli soldiers attacked, Friday, the weekly Great Return March processions along the eastern parts of the Gaza Strip, and injured 122 Palestinians, including 50 who were shot with live rounds, and three medics.

Thousands of Palestinians gathered along the eastern parts of the coastal region, hundreds of metes away from the perimeter fence.

The protesters marched carrying Palestinian flags and posters of Palestinians killed by Israeli army fire, while chanting against the ongoing illegal Israeli occupation of Palestine, its illegal colonies and polices, and the siege on the Gaza Strip.

The Palestinian Health Ministry in Gaza has confirmed that the medics provided treatment to 122 Palestinians, including fifty who were shot with live rounds, and three medics.

The Ministry added that dozens of wounded Palestinians were moved to a few hospitals, while the rest received treatment by filed medics.

It is worth mentioning that the army placed more sand hills, across the perimeter fence in the eastern parts of the Gaza Strip, from the northern parts in Beit Hanoun and Beit Lahia, in northern Gaza, in addition to the eastern part of Gaza city and the central region, all the way to the southern parts in Khan Younis and Rafah.
Palestinian injured by Israeli gunfire in Gaza

A Palestinian ambulance crew managed at dawn Friday to evacuate a wounded citizen from a border area near the Israeli security fence in the northeast of Gaza Strip.

According to the health ministry, a young man suffered bullet injuries in a border area and was evacuated to hospital by an ambulance.

The Israeli occupation army claimed, for its part, that its soldiers wounded a Palestinian man who attacked them with grenades on the northern Gaza border Thursday night, adding that there were no injuries to its forces

It said the armed man was spotted approaching the border fence and launched explosives at soldiers who arrived at the scene.

The army later released video footage of the incident, showing the Palestinian man wearing a military-style vest and firing grenades with a launcher toward the border.
22 aug 2019
Israeli airstrikes target resistance post in western Gaza 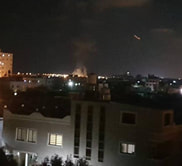 An Israeli warplane at dawn Thursday carried out two aerial attacks on a Palestinian resistance post in the west of Gaza City, with no reported casualties. video

Local sources told a reporter for the Palestinian Information Center (PIC) that a military helicopter bombed a resistance site in western Gaza and a few minutes later it targeted the same spot.

Earlier on the same day, the Israeli occupation army claimed that two Palestinian rockets from Gaza landed in an open area of land in the Negev.

Israeli officials continued to threaten with a massive military operation against the Gaza Strip while Israel still refuses to ease the blockade.

Israeli Minister of Energy, Yuval Steinitz, also a member of Israel’s cabinet, said on Monday that they “are planning a large-scale military operation in Gaza,” adding that Prime Minister Benjamin Netanyahu is working “firmly but in a wise and deliberate manner.”

Speaking to Israeli public radio, Steinitz said that the thee Palestinian men who were killed on Saturday night were killed before they approached the security fence.

“We also bombed inside Gaza to clarify who is responsible, ”he said, referring to the bombing of Hamas positions.

“None of the former generals had and will not be a long-term solution to the Gaza problem. But when we try to achieve a long-term truce, we demand a calm in the Gaza envelope and the return of the (Israeli citizens) prisoners and the bodies of the two soldiers.

The truth is that Israel has never succeeded in preventing terrorism, ”he said, referring to Palestinian resistance operations.

Two reports said yesterday that the Israeli security service estimates that the storming of Palestinian fighters from the Gaza Strip into Israel on Saturday night – Sunday was not planned by Hamas but “a local initiative.”

“Hamas is trying to maintain calm, but there are those who are not interested in calm,” an Israeli security official told Israel Radio. He said the Israeli army expects rocket fire from Gaza to continue in the coming days.
18 aug 2019
Netanyahu slammed by political leaders after tense weekend on Gaza border

With a month to go until the elections, a host of prominent politicians go on the offensive, calling the prime minister 'weak' after 2 rocket attacks and an infiltration attempt within 24 hours; 'Deterrence against Hamas hasn’t been eroded, it’s been erased,' says Gantz

Prime Minister Benjamin Netanyahu, who also holds the defense portfolio, faces growing criticism over his handling of the security situation in southern Israel. A host of prominent Israeli politician went on the offensive Sunday, attacking Netanyahu after a tense weekend on the Gaza border, with just a month to go until the September 17 elections.

Palestinian militants in Gaza fired at least four rockets into the southern city of Sderot within 24 hours over the weekend, with three projectiles being intercepted by the Iron Dome defense system.

In addition, medical sources in the enclave said Sunday that three Palestinians, who according to Israeli military were trying to infiltrate the border with Israel, were killed by IDF fire and another was left seriously wounded.

Former Defense Minister Avigdor Liberman was among the first to come out against the prime minister. "He is an excellent presenter but a weak leader who lacks leadership and is incapable of making decisions in times of crisis," wrote the Yisrael Beytenu chairman on his Facebook page.

"Again, we are faced with the unbridled behavior of the prime minister, who is currently on his way to the Ukraine to film an election propaganda, while the residents of the south are being held hostage,” Liberman added.

Blue and White Chairman Benny Gantz joined in on the criticism when he visited the Israeli communities bordering the Strip on Sunday morning. “The deterrence hasn’t been eroded, it’s been erased,” said the former IDF chief.

“We will defeat Hamas militarily, we’ll bring quiet to the residents of the south, and will not allow this to spill over into the West Bank.”

Gantz’s fellow Blue and White party member and another former IDF chief of staff, Gaby Ashkenazi, said the prime minister is “only preoccupied with himself.”

"The prime minister is weak, only preoccupied with himself and just wants quiet ahead of the elections,” said Ashkenazi. “This situation has been dragging on for over a decade. It’s incomprehensible that residents have to run to bomb shelters while they’re eating dinner. It's not just a strategic issue, it's every country’s basic duty to protect its residents.”

"We will back the prime minister in any military action that needs to be done, but we must turn the situation on its head,” said the Yamina party member. “We need to move on to a policy of persistent attacks, chasing after the terror leaders. They have to start fearing for their lives.”
Three Palestinians killed in Israeli bombing of Gaza border area

Three Palestinians were killed and another suffered injuries when an Israeli warplane bombed on Saturday night plots of agricultural land near the security fence in the north of the Gaza Strip.

According to the Palestinian health ministry, bodies of three victims and one injured citizen arrived aboard ambulances at the Indonesian Hospital in northern Gaza. video

A spokesman for the Israeli occupation army claimed that Israeli forces spotted a number of Palestinians near the security fence in northern Gaza before they were targeted by a helicopter and a tank.

Local sources told a reporter for the Palestinian Information Center (PIC) that Israeli helicopters bombed an unknown target in Beit Lahia as flares were being fired over the area.

The Israeli occupation army on Saturday evening announced that it intercepted two of three rockets fired from the Gaza Strip toward Israeli settlements adjacent to the enclave.

The Israeli army claimed that sirens were activated in the settler communities bordering the Gaza Strip after three rockets were fired from the seaside territory. The Iron Dome intercepted two of them, it added.

Israel's TV channel 13 said that no casualties were reported in the alleged attack.

On Friday the Israeli army claimed that it foiled a rocket attack launched from Gaza and responded by bombing several sites in the besieged area.
Hamas: Israel’s Renewed Attacks on Gaza “Message of Escalation”

The Hamas Movement has condemned Israel’s persistence in targeting resistance posts in the Gaza Strip as “a message of escalation and aggression.”

In press remarks on Saturday, Hamas spokesman Fawzi Barhoum said that Israel’s renewed aerial attacks on Gaza were aimed to divert attention from what he described as “the acts of courage taking place in the occupied West Bank.”

Barhoum stressed, according to Days of Palestine, that the Palestinian operations in the West Bank messed up Israel’s calculations and deepened its internal crises, adding that the resistance would not allow the Israeli occupation state to export its crises to Gaza.

Israeli warplanes, early this morning, attacked several targets throughout the Gaza Strip, causing damage but no injuries, according to WAFA correspondence.

The targets reportedly included open areas east of Tuffah, a suburb of Gaza City, as well as farms east of Deir al-Balah in the central Gaza Strip.

Missiles fired by the warplanes caused big holes in the ground and damage to areas but there were no immediate reports of injuries.

Israeli warplanes at dawn Saturday bombed several sites in the Gaza Strip, with no reported casualties.

Local sources told a reporter for the Palestinian Information Center (PIC) that airstrikes targeted a plot of cultivated land near the eastern cemetery in the east of Gaza City and a site in the east of al-Tuffah neighborhood.

They added that at least four air-to-surface missiles were also fired by a warplane towards an agricultural tract of land in the east of Deir al-Balah in central Gaza.

Luckily, no one was hurt in the aerial attacks, which only caused widespread panic among civilians in Gaza.

The Israeli occupation army claimed the air raids were in response to the launch of rockets from Gaza towards Israeli areas.