“The Great March of Return” 251 killed

The Israeli occupation army on Tuesday evening bombed a Palestinian farmland in Gaza.

Local sources said that an Israeli drone attacked a farmland east of Gaza city with two missiles. No injuries were reported.

A spokesman for the Israeli army said that the air raid targeted a group of Palestinians flying fire balloons toward Israeli settlements neighboring the Gaza border.
13 Palestinians injured by Israeli gunfire in Gaza protests

Hundreds of Palestinians gathered on Tuesday to take part in the Great March of Return's coast protests north of Gaza.

Medical sources reported that 13 Palestinians were injured including a journalist hit directly with a tear gas canister in the head.

A representative of the Great March of Return activists, speaking during the protests, affirmed that the night demonstrations will be resumed starting Tuesday.

Khader Habib, a member of the Higher National Committee for the Great March of Return and Breaking the Siege, said that the border protests will continue until they achieve their goals and break the blockade.

"We will fight the occupation with our simple weapons, and we will never wave the white flag," he stressed.

A few months ago, Gaza coast protests became a major part of the Great March of Return which was launched on 30 March 2018.

Since the start of the border protests, the Israeli occupation army has killed 271 Palestinians, and injured 29,000 others, about 500 of whom are in critical condition.
4 Palestinians shot, injured in Gaza's night protests

Four Palestinians were shot and injured with Israeli live ammunition during “Night Confusion” protests along the eastern borders of the besieged Gaza Strip, on late Monday.

Medical sources confirmed that one Palestinian was shot and injured in his foot, in Khan Younis, in southern Gaza. His medical condition was described as moderate.

Sources also confirmed that another Palestinian was shot and injured by Israeli forces in Rafah, in southern Gaza, while two other Palestinians were injured east of Jabaliya, in northern Gaza.

Hundreds of Palestinians gathered along the eastern borders of Gaza to protest against the nearly 12-year Israeli siege.

Sources added that protesters ignited a number of rubber tires on fire near the security border fence with Israel and threw rocks at Israeli forces.

For several weeks, hundreds of Palestinian protesters, have been organizing, as well as participating in night protests, during which they set tires on fire and chant slogans through loud speakers, while marching towards the border with Israel. These protesters are also known as the "Night Confusion" unit.
18 mar 2019
Clusters of incendiary balloons land across southern Israel

A number of incendiary balloons launched from the besieged Gaza Strip landed across southern Israel, on Monday morning.

According to Hebrew-language news outlets, Palestinians from Gaza continued to launch incendiary balloons towards Eshkol Regional Council, however, no material damages were reported.

Israeli police and explosives experts immediately arrived at the scene and dealt with the balloons.

No injuries nor material damages were reported.

Sources added that more than 20 incendiary balloons and kites were launched from Gaza towards southern Israel.

Palestinians in Gaza view the incendiary kites as a form of protest against Israel's nearly 12-year blockade of Gaza and for Palestinian refugees right of return to their homes and lands which are now known as Israel.
17 mar 2019
IOF shoots Palestinian on Gaza border

A Palestinian youth was injured on Saturday evening after being shot by the Israeli occupation forces (IOF) on Gaza border.

Medical sources said that a Palestinian young man in his twenties was injured by IOF gunfire east of al-Maghazi refugee camp in the middle area of the Gaza Strip, and was later transferred to a local hospital for treatment.

The National Committee for Breaking the Siege decided to exceptionally suspend “The Great March of Return” on its 51st Friday alongside the eastern border fence of the besieged Gaza Strip.

The committee said in a short statement that protests for the 51st Friday were postponed in order to save the lives of protesters amid Israeli escalation against the Gaza Strip, and in preparation for Land Day protests on March 30th, as it would mark one year of “The Great March of Return” protests.

This is the first time the committee suspends “The Great March of Return” protests since its beginning on March 30th, 2018. 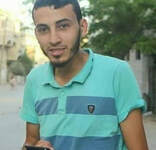 A Palestinian young man on Monday night succumbed to a serious injury sustained during his participation in a March of Return rally on the Gaza border.

23-year-old Mousa Mousa, from Deir el-Balah in central Gaza, was injured in a protest near the border on March 1, according to the health ministry.

Mousa was the second Palestinian who died of wounds from Israeli gunfire in recent days.

His death has brought the number of Palestinians killed by Israeli soldiers since the March of Return rallies staged in March 30, 2018 to 271 martyrs.
11 mar 2019
Gazan young man dies of injury sustained last month

A Palestinian young man was pronounced dead at dawn Monday after he succumbed to an injury he sustained during his participation in a March of Return rally staged last Monday in the east of Khan Younis, south of Gaza.

According to the health ministry in Gaza, 22-year-old Bassam Safi died of a serious injury after an Israeli tear gas canister directly hit his head last February.

With the death of Safi, the number of Palestinian protesters who had been killed by Israeli soldiers since the March of Return rallies started in March 30, 2018 rose to 270 martyrs.
10 mar 2019
Qatari funds to be transferred into Gaza through bank payments

The next payment of Qatari financial funds to Hamas officials in the besieged Gaza Strip will be transferred under the form of payment for "authorized projects" through bank transfers instead of briefcases, on Sunday.

According to Haaretz news outlet, the financial aid will be transferred as payment for "authorized projects," instead of briefcases, which were previously used to allow entry of financial funds to Gaza.

Sources also mentioned that Israeli defense officials are concerned about "possible violent escalation" in Gaza and the West Bank due to the upcoming anniversary of "The Great March of Return" weekly protests along the eastern borders of Gaza.

The majority of the nearly two million Palestinians in the Gaza Strip are sealed inside the coastal enclave due to the continuation of the military blockade imposed by Israel and upheld by Egypt on the southern border.

Gaza's residents endure distressing living conditions, including a shortage of safe drinking water and regular power cuts, partly due to a lack of fuel for Gaza's power plant, as well as receiving an average of just four hours of electricity per day.

The destruction from three Israeli offensives over the past six years, including damage to the enclave's water, sanitation, energy, and medical facilities, coupled with slow reconstruction due to the blockade led the UN to warn that Gaza could be "uninhabitable" by 2020.
Israeli Army Fires Missiles Into Gaza

The Israeli Air Force fired, late on Saturday at night, many missiles targeting sites run by armed resistance groups in several parts of the Gaza Strip, after the army alleged that a balloon, carrying an anti-tank shell, was flown from Gaza.

They added that the army also fired missiles into Al-Waha site, the same center, which was bombarded less than 24 hours earlier, causing serious damage.

Israeli sources quoted the army stating that a “suspicious balloon which was launched from the Gaza Strip into the Sdot Negev Regional Council of settlements, was carrying an anti-tank shell.”

They added that the device did not explode, and was safely defused by police sappers.
9 mar 2019
Israeli Soldiers Shoot A Palestinian In Central Gaza

Medical sources said the soldiers, stationed across the perimeter fence, east of al-Boreij, fired many live rounds at Palestinians, on their lands, moderately wounding the young man.

They added that local medics were called to the scene, and rushed the wounded young man, who was shot in his right leg, to the Al-Aqsa Hospital, in Deir al-Balah.
Israeli Army Fires Many Missiles Into Gaza

The Israeli air force fired, on Saturday at dawn, several missiles into a few areas, near Gaza city, and in the southern part of the coastal region, causing property damage.

They added that the army fired at least one missile into another site, in the Zeitoun neighborhood, southeast of Gaza city, causing property damage.

The army also fired at least two missiles into an agricultural land, in Juhr ad-Deek area, southeast of Gaza, causing damage to the land and a few surrounding homes.

In addition, the army fired two missiles into another site, west of Khan Younis, in the southern part of the Gaza Strip, destroying the building and causing damage to surrounding homes.

There have been no reports of casualties among Palestinians in the latest Israeli assaults against the coastal region.

The Israeli army claimed it was retaliating to flammable balloons and a shell launched from Gaza, into nearby Israeli areas.

In a brief statement, the army said that a shell was also fired from Gaza and landed in an open area in the Eshkol Regional Council of Settlements.
8 mar 2019
Palestinian killed, 47 injured on Gaza border

A Palestinian was killed and 47 others were injured on Friday when the Israeli occupation forces opened fire at the peaceful protesters taking part in the Great March of Return in Gaza.

The Ministry of Health announced that Tamer Arafat, 23, died after being shot by the Israeli forces east of Rafah city in the southern Gaza Strip.

The Ministry said that 47 Palestinians were injured, including two women, 15 children, 4 paramedics, and 2 journalists.

Thousands of Palestinians marched along the border fence between the Gaza Strip and the 1948 occupied territories on the 50th Friday of the Great March of Return which was named "Friday of the Palestinian Woman".

The Higher National Committee of the Great March of Return and Breaking the Siege said that Friday's protests, which coincided with Women's International Day, were aimed at celebrating Palestinian women and their steadfastness.

Hamas's spokesman Abdul-Latif al-Qanou' said in press statements that the Palestinian women were and still are the Palestinian men's partners in the fight for freedom and independence.