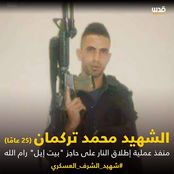 One Palestinian police officer was killed, on Monday evening, after carrying out a shooting attack against Israeli soldiers near Beit El settlement, east of the central West Bank city of Ramallah, wounding three of them, one seriously.

The Israeli army said the soldiers shot and killed the Palestinian, after wounding three of them, one seriously, at the Beit El road block.

The army added that the soldiers, manning a military tower close to the Annexation Wall, at the entrance of Beit El, came under fire from the Palestinian officer, before shooting him dead.

The officer has been identified as Mohammad Turkman, 25, from Qabatia town, south of the northern West Bank city of Jenin.

The Israeli ambulance provided the needed treatment to two wounded soldiers and moved them to hospitals in Israel.

Following the shooting several armored Israeli military vehicles invaded a fuel station, and a coffee shop, in the al-Baloa’ nearby area, in al-Biereh city.

The soldiers confiscated surveillance tapes and equipment, and fired many live rounds, rubber-coated steel bullets and gas bombs at local youngsters who hurled stones on the invading forces.

The army also declared Ramallah a closed military zone, and closed all military roadblocks leading to the district, in addition to installing several additional roadblocks.

A Palestinian youth was shot dead by the Israeli occupation army on Monday evening after he carried out an anti-occupation shooting attack in Ramallah province, wounding three Israeli soldiers.

According to Israeli news outlets, one soldier was seriously wounded and two others were lightly-to-moderately hurt when a Palestinian anti-occupation youth opened fire at the Beit El checkpoint at the northern entrance to Ramallah city.

The anti-occupation attacker, named Mohammad Abdul Khalek Turkman, was a Palestinian security officer in his 25s and a native of Jenin’s southern town of Qabatiya.

Paramedics arrived on the scene and took the injured soldiers to Hadassah Medical Center for treatment.

The resistance movement Hamas hailed the anti-occupation shooting, calling it heroic and “a strong message in the face of Israeli crimes”.

The Islamic Jihad Movement also acclaimed the operation, dubbing it a natural response to Israel’s terrorism against the Palestinian people.

Speaking with the PIC, Islamic Jihad leader Khader Habib said the anti-occupation attack is a translation of Palestinians’ right to self-defense in light of the ongoing Israeli assaults on Islamic holy sites and Judaization of Occupied Jerusalem.

Several Palestinians flocked to Turkman’s family home to extend condolences to his parents and relatives.

At least 236 Palestinians, including 11 from Qabatiya town, were killed by the Israeli occupation army since the outburst of the anti-occupation Jerusalem Intifada, in early October.
Commercial strike declared in Beit Ummar to mourn slain youth

A commercial strike was declared in Al-Khalil’s town of Beit Ummar on Monday to mourn a slain Palestinian youth.

Local activist Mohamed Ayad Awad said all commercial shops and facilities have been shut down in Beit Ummar, in the southern occupied West Bank, in protest at Israel’s murder of the anti-occupation youth Khaled Ahmad Alyan Ikhlil, shot dead by the occupation troops near the main entrance to the town on Sunday evening.

Awad added that the Israeli occupation army on Sunday evening closed off all thoroughfares out of and into Beit Ummar.

According to the Silwan-based Wadi Hilweh Information Center, the occupation army stormed Ras Al-Amoud, in Silwan, and broke into a Palestinian school, triggering a state of panic among students and teaching staff.

The IOF soldiers showered the school with random barrages of rubber bullets and sound bombs.

No injuries were reported in the assault.
1,000 Israeli fanatics storm Kafl Haris

A PIC news correspondent said Israeli army troops rolled into Kafl Haris at predawn time and closed off the main access roads out of and into the area.

Buses carrying hundreds of Israeli fanatics showed up in the area at the crack of dawn.

According to the 0404 news site, the occupation army provided a tight security shield for over 1,000 settlers.

Soft-spoken, bespectacled and mild-mannered with the earnest, erudite mien of the astrophysics student he once was, 47-year-old Hagai El-Ad appears an unlikely candidate to be one of Israel’s most hated men.

But the human rights activist is facing the wrath of Israel’s rightwing establishment after urging the UN to “take action” against his country to bring an end to its occupation of Palestinian lands. Mr El-Ad, who chairs the human rights group B’Tselem, was accused by prime minister Benjamin Netanyahu of “slandering the state” after testifying at an informal meeting on October 14 of the UN Security Council on Israel’s illegal settlements in the West Bank and East Jerusalem. Since then, conservative Israelis have taken to the internet to accuse him of treason and urge authorities to jail him.

The affair is emblematic of intensified tensions between Israel’s ruling rightwing camp and leftwing civil society groups, who accuse Mr Netanyahu and his allies of eroding Israel’s democratic freedoms for short-term political gain.

David Bitan, an MP with the ruling Likud and chairman of Mr Netanyahu’s hard-right coalition, has called for Mr El-Ad to be stripped of his citizenship. Amid widespread criticism, he later said he did not mean to jeopardise freedom of speech. However, his spokesman said the MP would sponsor a bill barring Israelis from urging an international body to “take action against Israel”.

Leftwing Israelis have rallied behind Mr El-Ad and B’Tselem, which says that online donations from individuals have jumped tenfold since the controversy erupted. The US State Department weighed in, saying America was “grateful” for the work of B’Tselem and other Israeli human rights groups. “It has been a long time since there was such a heated discussion about the occupation,” Mr El-Ad told the FT.

At the UN, Mr El-Ad said Palestinian lands were “slowly sinking in a sea of Israeli domination”. He quoted Martin Luther King’s assertion that “freedom is never voluntarily given by the oppressor”. He did not spell out what kind of action the UN might take, and notes now that B’Tselem does not recommend specific solutions for resolving the Israeli Palestinian conflict.

However, his remarks hit a nerve. Diplomats and analysts in Israel have speculated that the US might back a firm UN Security Council resolution on the Israeli-Palestinian conflict after the US election, as a departing gesture by President Barack Obama. Israel accuses the UN of systematic bias and this week withdrew its ambassador to Unesco after the cultural agency passed a controversial declaration that it said belittled Jewish historic and religious ties to Jerusalem’s holy sites.

For his part, Mr El-Ad brushes away the controversy and insists that opposing the occupation is “the most urgent and most pro-Israeli need that I can identify in this society”. “It’s worth noticing that they have not responded actually to anything we said,” he says of the Netanyahu government. “They haven’t refuted the data, the analysis; they are not engaging in a conversation.”

Mr Netanyahu’s spokesman referred to a Facebook post by the prime minister this week in which he said non-governmental organisations played an “important role”, but had “no right to impose on Israeli citizens what they failed to convince them to adopt at the ballot box”.

Even before Mr El-Ad’s speech, B’Tselem was already under scrutiny in Israel, whose government this year passed a law forcing NGOs with foreign governmental support to disclose their funding. B’Tselem gets more than two-thirds of its funding from foreign sources, including the EU, the UN, and European countries. He and other B’Tselem activists say they have faced harassment, death threats, and cyber attacks on computers aimed at disabling the group’s website.

Mr El-Ad’s mainstream Israeli background makes him an unlikely seeming hate figure. He was born in Haifa and his father was a reporter with Ha’aretz, the left-leaning newspaper. At Jerusalem’s Hebrew University, Mr El-Ad gravitated to activism when he began volunteering with its gay and lesbian student union. He later worked for the Association for Civil Rights in Israel, another NGO, before joining B’Tselem in 2014, when the war in Gaza unleashed febrile emotions in Israeli society and — say leftists — an intensifying government and public backlash against political dissent.

The discord is likely to escalate, if anything, as next year’s 50th anniversary of Israel’s seizure of Palestinian lands in the Six Day War approaches. “The occupation is a catastrophe for Palestinians — who have suffered endless human rights violations for close to half a century — and also catastrophic for Israeli society,” Mr El-Ad says.
Kiswani: Israel prevents implementation of 40 projects in Aqsa

“The Israeli occupation prevents the implementation of more than 40 vital projects to restore al-Aqsa Mosque facilities and walls,” said the director of the Al-Aqsa Mosque compound, Sheikh Omar al-Kiswani.

The Israeli settlers’ break-ins into the Mosque are a nightmare that keeps haunting the Muslim worshipers, he added.

Kiswani stated that one of the projects is the lighting project, which requires installing lighting poles from the Lions Gate to the inside of the Mosque, in addition to changing the cables and lamps. The fire alarm systems and other projects need to be completed as well.

He added that the restoration projects are very important as the Mosque receives thousands of visitors and worshipers every day, especially on Fridays.

"Israeli settlers break in by force and guns, but that won’t give them the right and will make us more resilient,” said Kiswani.

He added that the Israeli police had arrested one of the Mosque’s guards, at the pretext that that he raised his hand showing ‘Hitler’s Swastika’ as Israeli settlers broke into the Mosque.

He said, “117 Israeli settlers broke into al-Aqsa Mosque on Tuesday (25th October, 2016) in five groups. 40 of them were soldiers in military uniform, four police officers, and the others were Jewish settlers and rabbis.”

The number of Israeli settlers who broke into the Mosque during the Jewish holiday of Tabernacles reached 1,611, and Israeli rabbis spoke about the alleged Temple during their tour.

Kiswani said that during the Jewish Feast of Tabernacles, Israeli police around al-Aqsa Mosque restricted the Muslims’ entrance to the Mosque and prevented some youths from entering during the Israeli break-ins.

He explained that the Israeli restrictions around al-Aqsa Mosque aim at decreasing the number of Muslim worshipers and giving space to the settlers, pointing out that the number of break-ins has increased remarkably so far this month (October 2016).

“The Israeli procedures, break-ins, and targeting of guards, servants and worshipers aim at imposing an Israeli status quo and to force us to accept it. But this won’t happen,” he affirmed.

A call to visit al-Aqsa

Kiswani stressed the importance of visiting al-Aqsa Mosque from all parts of Palestine on a daily basis since it is a target for Israel.

He pointed out that six guards of the Mosque have been banished from al-Aqsa Mosque by Israeli orders.