“Fatah statements are a proof of the two-faced position adopted by the movement vis-à-vis national reconciliation,” Hamas spokesman Sami Abu Zuhri said in a statement.

“Fatah’s former statements as regards reconciliation just make part of an attempt to pull the wool over Palestinians’ eyes and cover up its pro-Israel policies,” stated Abu Zurhi.

He referred to Abbas’ participation in the funeral of the former Israeli statesman Shimon Peres as another proof of the party’s inherently dubious politics.

According to Abu Zuhri, Fatah’s calls to review the local elections law represents an attempt to both sidestep and hinder the electoral process. “Such a position stems from Fatah’s absurd behavior which aims at manipulating the electoral process and altering its laws in favor of partisan interests,” Abu Zuhri noted.

According to the PIC reporter, Israeli forces closed this morning Jalber checkpoint leading to Tel Rumeida neighborhood and prevented students’ passage under the pretext of Jewish holidays.

Local families from Tel Rumeida were prevented from leaving the neighborhood due to the Israeli settlers’ marches which coincide with the Jewish holidays during October.

Approximately 2,355 Palestinians were arrested in occupied Jerusalem since October 2015, Jerusalem Committee for Families of Prisoners revealed.

According to the committee, 1,209 arrests were carried out during clashes while 1,146 Jerusalemites were arrested from their houses.

During the reported period, 42 Jerusalemite detainees were held in administrative detention for different periods of time ranging between three and six months.

The Israeli occupation authorities (IOA) have tightened the noose around Muslims’ neck at the Ibrahimi Mosque, in the southern occupied West Bank, under the pretext of imminent Jewish Holidays.

Tight military restrictions have been imposed by the occupation army at and around the Ibrahimi Mosque, in al-Khalil province, so as to set the stage for upcoming sacrilegious ceremonies marking the advent of Jewish Holidays.

The IOA announced a decision to close the Ibrahimi Mosque before Muslim worshipers for six days, on October 3, 4, 6, 12, 18, 19. Israeli settlers will be allowed free access into the Mosque during those days.

The IOA further ruled for banning the call for prayers via the Mosque loudspeakers and for subjecting the Muslim worshipers to intensive search at the entrance gates.

Palestinians aged between 15 and 30 years are also banned from performing their religious prayers at the Mosque. Head of the Ibrahimi Mosque Sheikh Hefdhi Abu Esneineh said the tough Israeli measures and crackdowns on the Muslim youth emptied the Mosque of its Muslim worshipers.

A few months ago, the Israeli occupation authorities slapped on ban on Muslim worshipers aged between 15 and 30 years and gave instructions to gun them down in case they enter the site.

“The number of visitors from neighboring towns and villages have almost hit zero due to the death threats and terror sparked by the occupation army,” he added.
Thousands call for overthrowing Abbas as they bid farewell to Dhiaa 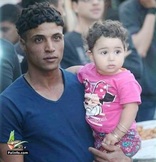 Thousands of Palestinian protesters called Sunday for overthrowing the Palestinian Authority (PA) President Mahmoud Abbas during the funeral procession of youngster Dhiaa Marshoud, who was killed by the PA forces on Wednesday.

Walking in Dhiaa’s funeral procession, which kicked off from the Rafidia Hospital in Nablus, thousands of Palestinians urged Abbas to step down.

The mourners further called for toppling the PA national security chief, Nidhal Dukhan. Dhiaa was killed by the PA troops last Wednesday after he was shot, along with his three friends, while driving in eastern Nablus.

Members of the Palestinian Legislative Council (PLC), including Ahmad al-Haj Ali and Jamal al-Tiraoui, also joined the funeral procession. Rage flared among the Palestinians as Abbas showed up in the funeral of the former Israeli President Shimon Peres while he did not show any kind of sympathy nor extended his condolences over the death of the Palestinian youth.
2 oct 2016
Israeli government marks Rosh Hashanah by sealing borders, expanding settlements

Israeli authorities locked down the West Bank and Gaza, home to over 5 million Palestinians, in preparation for the national celebration of the Jewish New Year, Rosh Hashanah, which begins at sundown on Sunday. In addition, the Israeli government approved plans for nearly one hundred more settlement units to be constructed in violation of international law in the Israeli-occupied West Bank, on illegally-seized Palestinian land.

The lockdown began at 12:01 am Sunday morning, and will continue until 11:59 pm on Tuesday night. Israeli authorities cited ‘security concerns’ as the reason for the closure.

Rosh Hashanah is the Jewish celebration of the New Year, according to the Hebrew calendar, and is a two-day celebration in which celebrants pray for a new year of peace and prosperity. The celebration involves blowing a ram’s horn and lighting candles.

During the lockdown, Palestinians are prevented by the Israeli military from traveling. They are also prevented from working or attending school, if their work or school is on the other side of an Israeli checkpoint.

Only ’emergency’ cases will be allowed to cross the border – but those ’emergencies’ will have to have been cleared and approved by Israeli authorities in advance of the lockdown, according to the Coordinator of Government Activities in the Territories.

Shiloh is locate in the northern West Bank, north of the Palestinian city of Nablus. According to a report in the Telegraph newspaper, “Shiloh was founded in the early 1970s when the settlers wanted to spread northwards. Several attempts to settle around the Palestinian city of Nablus had been foiled by the army and a more sophisticated approach was required. It came in the form of Ira Rappaport, an extremist even by the standards of the early settlers. After gaining permission from the government to set up an archaeological dig in Shiloh, he quietly started building a settlement.

“Rappaport was a key member of a terrorist group called the Jewish Underground. In 1985, he was found guilty of planting a car bomb in Nablus that blew the legs off two Palestinian officials, Bassam Shakaa and Karim Khalaf. In a ruling that outraged many in Israel, the judge found him not guilty of attempted murder and convicted him on the charge of causing grievous bodily harm. He was sentenced to less than a year in prison and on his release was appointed leader of the Shiloh community.”

The new settlement units will be used to house Israeli colonizers who constructed an illegal colonial outpost called ‘Amona’, which was ruled illegal under Israeli law.

All Israeli settlements are considered to be a violation of international law, the Fourth Geneva Convention on the role of occupying nations, and agreements signed between the Israeli government and the Palestinian Authority.

Since 1993, when the Oslo peace agreement was signed, Israel has transferred over 600,000 Israeli citizens into colonial settlements, constructed on Palestinian land that was seized by the Israeli military and then transferred to paramilitary settlement groups with the express purpose of expanding the Israeli state further onto Palestinian territory.
13 Palestinians killed, 170 others wounded last month

13 Palestinians, including three children, were killed and 170 others were wounded by the Israeli occupation forces (IOF) in the West Bank, Jerusalem and the Gaza Strip during last September.

10 of those victims were killed in cold blood at Israeli checkpoints, according to a recent report released by Abdullah Hurani Center for Studies and Documentation.

The IOF also arrested and detained about 380 citizens, many of them children, during the same month.

The report also highlighted Israel's settlement expansion, saying that tenders for the construction of different 1,000 housing units and other buildings were announced in September.

During the reporting month, the Israeli authorities demolished 17 Palestinian homes and 44 structures used for agricultural, industrial, commercial, educational and personal purposes in the West Bank and Jerusalem.
Musallam to Abbas: Look for a cave among Israeli thieves to live in

Father Manuel Musallam, pastor of the Latin Church in Gaza, has launched a scathing attack on Palestinian Authority president Mahmoud Abbas for his recent participation in the funeral of former Israeli president Shimon Peres.

In Facebook remarks on Saturday, Father Musallam started his message to Abbas with the famous popular adage saying that "everything is a debt or a loan, even eye tears."

"Did Sharon attend the funeral of Abu Ammar and lamented him, Mr. President, in order for you to pay the debt with crocodile tears over Peres?

Did the bells of Churches ring and were the sounds of the holy Qur'an recited from minarets in grief in order to convey your love to the house of the deceased Zionist who killed your people, occupied your land and sucked the blood of your martyrs?" He rhetorically questioned.

"Today, as a result of your actions, Israel has really occupied the entire Palestine. Today, your national project collapsed along with the Palestinian Authority and all its institutions," the Palestinian clergy said.

"Today, you have been expelled from the free people's hearts, so go look for a cave among Israel's thieves to live in."
1 oct 2016
IOF imposes complete closure on oPt

Similar restrictions will be also imposed for two days next week, he added.

The Israeli military restrictions came in coincidence with the Jewish holidays in October.
Hamas: We will continue our support for the intifada

The Hamas Movement has said it will remain committed to supporting al-Quds intifada (uprising) against the Israeli occupation, calling on the Palestinian people from all spectra to patronize it.

In press remarks on the first anniversary of al-Quds intifada, senior Hamas official Khalil al-Hayya said that his Movement would continue to boost the intifada, stressing the need for strong popular support to help it continue.

"If Peres was a man of peace, so who is the killer in the occupation state?" the Hamas official underlined.