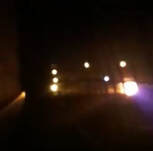 The sources said the army fired at least two missiles into a site in the densely populated Zeitoun neighborhood, in Gaza city, causing property damage.

They added that the army also fired one missile into another site, east of Gaza city, causing damage.  video

No injuries were reported in the two incidents.

The Israeli army claimed it was targeting Hamas posts after a homemade shell was reportedly fired from Gaza and landed in an open area in the northern part of the Negev Desert.

Earlier Friday, the soldiers killed one Palestinian, identified as Fahed Mohammad Walid al-Astal, 16, and injured several others, when the army attacked a group of protesters, hundreds of meters away from the perimeter fence.
Rocket sirens sound in Ashkelon, Gaza border communities

Rocket sirens sounded at 11pm Friday in the southern city of Ashkelon and the kibbutzim of Karmia and Zikim near the border with the Gaza Strip.

The IDF said that the projectiles fired from Gaza at Israel were not rockets, adding that the air raid warning and air defense system functioned as required.

The Friday night attack from Gaza came just two hours after a rocket fired from the Hamas-run coastal enclave fell in an open area of Eshkol Regional Council, close to the border with the Strip.

There was no damage or injury caused in the attack.

The IDF struck a Hamas military in northern Gaza in response.

The rocket attacks follow the death Friday afternoon of 16-year-old Palestinian Fahed al-Astal, who was shot in the stomach by IDF troops during a protest along the border fence. Four other people were wounded, according to Gaza officials.

The protest took place despite a decision by Hamas to suspend the weekly "March of Return" demonstration for the third consecutive week, in line with a request from Israel as part of negotiations for a sustained period of calm in Gaza.

A member of the "March of Return" steering committee said after the death of the teen that Israel was responsible for the loss of life and called on protesters to turn out for a demonstration next week.

The IDF said the claims regarding of the circumstances of the boy's death would be investigated, adding that dozens of rioters had arrived the border independently, tried to sabotage the fence and threw explosives at the IDF troops there.

Also Friday, Palestinians said that one of the Islamic Jihad operatives hurt during the most recent round of violence had succumbed to his wounds.

The organization threatened at the end of the flare-up that the killing of protesters at the Gaza fence by the IDF would lead to a military response - but the organization has so far not claimed responsibility for launching the rockets on Friday night.

Hamas said earlier Friday that contacts have been renewed over the past two days between the organization and various mediators, primarily Egyptian intelligence officials, regarding reaching an agreement with Israel over calm in Gaza.

Lebanese newspaper Al-Akhbar, which is considered very close to the organization, reported that UN special envoy to the Middle East Nickolay Mladenov is expected to meet in the coming days with the Hamas leadership in order to complete the negotiations on the agreement.
29 nov 2019
Gazan injured in recent Israeli attack dies of serious wounds

A Palestinian young man died on Friday afternoon of serious injuries he sustained in the latest Israeli aggression on the Gaza Strip.

The Ministry of Health announced that Raed al-Sirsawi, 30, succumbed to wounds caused by an Israeli airstrike that targeted the motorbike he was driving in Gaza City during the two-day aggression.

Al-Quds Brigades, the Islamic Jihad's armed wing, mourned al-Sirsawi and announced that he was one of their fighters.

Israeli soldiers killed, Friday, one Palestinian was killed and many others, when the army attacked a group of protesters, hundreds of meters away from the perimeter fence.

Israeli soldiers, stationed in their posts and army vehicles across the fence, fired live bullets, rubber-coated steel rounds, and high-velocity gas bombs at several Palestinians, killing one and injuring at least five others, east of Khan Younis, in the southern part of the Gaza Strip.

Some of the wounded were moved to the hospital while many others were treated in the field hospitals.

Dr. Ashraf al-Qedra, the spokesperson of the Health Ministry in Gaza, has confirmed that the soldiers killed Fahed Mohammad Walid al-Astal, 16, after shooting him with a live round in the abdomen.

Dr. al-Qedra added that the soldiers also shot at least five other Palestinians, and caused many to suffer the effects of teargas inhalation.

The incident took place when approximately twenty Palestinians gathered on Palestinian lands, a few hundred meters from the fence; the Israeli army said it was “investigating the incident.”

Talal Abu Tharifa, a member of the Political Bureau of the Democratic Front for the Liberation of Palestine (DFLP) said the Palestinians gathered at the Great Return March encampment, east of Khan Younis, and marked International Day of Solidarity with the Palestinian People.

Abu Tharifa added that the Palestinians were at least 700 meters away from the perimeter fence and that the soldiers opened fire on them regardless.

It is worth mentioning that the Great Return March processions have been suspended for the third week, but have not been canceled.

The Committee for the Great Return March Processions said the temporary halt of the processions is not related to any “truce talks,” but to avoid further casualties after Israel threatened to escalate its already excessive use of force.

Over 348 Palestinians have been killed in the Gaza Strip, and about 18,500 others injured by Israeli forces since the beginning of the Great March of Return protests at Gaza’s border, on March 30, 2018.

The Palestinian Center for Human Rights (PCHR) documented 215 killings by Israel since the outbreak of the Great Return March protests on 30 March 2018, including 47 children, 2 women, 9 persons with disabilities, 4 paramedics and 2 journalists.

Additionally, 14,713 were wounded, including 3,696 children, 387 women, 253 paramedics, and 218 journalists, noting that many of those injured had sustained multiple injuries on separate occasions.

These figures do not include the Palestinians who were killed by Israeli bullets, missiles, and shells, during Israeli offensives on Gaza.

The weekly protests call for lifting the Israeli blockade of the Gaza Strip and for the unimpeded return of the Palestinian refugees, to their ancestral homes in pre-1948 Palestine.

Defense Minister Naftali Bennett warned the Gaza terror factions Wednesday morning that Israel will respond to any rockets fired at Israeli territory, whether they hit population centers or not.

Hamas responded on Wednesday to the airstrikes, calling the Israeli military 'delusional' for trying to allegedly impose new conflict rules on the organization.

"The Israeli enemy is delusional if it thinks it could impose new conflict rules on Hamas," said the terror group. "Hamas and its military wing have the capabilities to prove the Israeli leadership's ignorance."

IDF warplanes attacked Hamas military targets in the Gaza Strip late Tuesday night after two rockets were launched at Israel from the coastal enclave controlled by the terror group.

One of the rockets was intercepted by the Iron Dome and the other landed in an open area.

The IDF Spokesperson's Unit said that some of the targets in the two waves of airstrikes included Hamas underground military facilities.

Rocket alert sirens sounded in the southern city of Sderot and the Sha'ar HaNegev Regional Council at around 8:50 pm, followed shortly by two loud explosions.

The army later issued an official statement confirming the launch, which comes just two weeks after the latest cross border flare-up between Israel and the Palestinian factions in the Strip.

One woman appears to have been hurt while making her way to a bomb shelter and needed medical treatment. No other casualties or damage was reported.

On Monday the military also said a rocket launch from Gaza was detected but the projectile landed in an open area outside the Eshkol Regional Council close to the Gaza border. Rocket alert sirens did not sound prior to that.

For the past two weeks, a tenuous ceasefire has been observed after yet another round of violence on the volatile border.

The latest round of fighting was triggered when Israel killed a top commander from the Iranian-backed Islamic Jihad, deeming him an imminent threat.

The IDF said the operation, dubbed "Black Belt," was a successful mission, involving personnel from across the branches of the military working together with "initiative, subterfuge and surgical precision."
Israeli aerial attacks target different sites in Gaza

Israeli warplanes at dawn Wednesday launched airstrikes on the Gaza Strip, with no reported casualties.

A reporter for the Palestinian Information Center (PIC) said that the dawn aerial attacks targeted a resistance site in the west of Khan Younis and an agricultural plot of land in the east of Shuja’iyya. video

Earlier after midnight, a warplane fired at least five missiles at the Ein Jalout site, which belongs to al-Qassam Brigades of Hamas, in the southwest of Khan Younis.