Local sources told Quds Press that dozens of Palestinian youths gathered near the border fence following the funeral of the young man who was shot and killed yesterday by the IOF.

Violent clashes broke out when Israeli forces opened their machinegun fire at the youths.

Gazan youths responded by throwing stones at the soldiers who fired teargas bombs during the confrontations.

No casualties were initially reported during the clashes.

Two other young men were also injured in the same area by IOF shooting meant to disperse the weekly youth protest against Israeli violations in Occupied Jerusalem and the West Bank.
IOF opens live fire at Palestinian fishermen

The PIC reporter said that Israeli naval boats deployed off the coast of Beit Lahiya in the northern Gaza Strip opened live fire at Palestinian fishermen, forcing them to flee the area.

No injuries were reported during the armed attack.
18 nov 2016
Israeli Army Kills One Palestinian, Injures Three Others, In Gaza 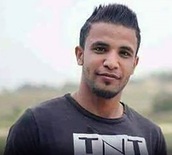 Palestinian medical sources have reported that one Palestinian was killed, on Friday evening, and three others were injured, after Israeli soldiers, stationed across the border fence, opened fire on Palestinian protesters in central Gaza, and east of Gaza city.

The sources stated that the soldiers, stationed on military towers near the border fence, east of the al-Boreij refugee camp in central Gaza, fired many live rounds, gas bombs and rubber-coated steel bullets on the protesters, killing a young man, identified as Mohammad Sa’id Abu Sa’da, 26, and wounding two others.

Palestinian medics moved the slain Palestinian, and the wounded, to the nearby Al-Aqsa Hospital in Deir al-Balah, in central Gaza. Many Palestinians suffered the effects of teargas inhalation.

In addition, soldiers stationed on towers at the Nahal Oz military base, east of Gaza city, fired several live rounds at Palestinians, close to the border fence, moderately wounding one Palestinian, who was moved to the Shifa hospital, while three others suffered the effects of teargas inhalation.
16 nov 2016
Israeli Navy Abducts Two Fishermen In Gaza Waters

Israeli navy ships attacked, on Tuesday evening, Palestinian fishing boats near the shore in the Sudaniyya Sea, in Gaza, and abducted two fishers.

The WAFA Palestinian News agency has reported that the navy attacks the fishing boats in the Sudaniyya Sea area, near Gaza city, while they were sailing less than four nautical miles from the shore.

It added that the navy used water cannons against the fishing boats, before abducting two fishers identified as As’ad Omar and Ammar Sultan, in addition to confiscating their boats, and took them to the Ashdod Port.

The attack is part of daily violations against the fishers in Palestinian territorial waters, in addition to assaults targeting farmers and workers in Palestinian lands, in areas close to the border fence, in the besieged coastal region.

The fishermen were reportedly sailing within the six-nautical-mile zone authorized by the Israeli occupation navy.

The fishermen went ashore right away for fear of being killed or kidnapped in the assault.

Palestinian fishermen in the blockaded Gaza Strip have been the permanent targets of attacks and arbitrary abductions by the Israeli occupation navy while on their way to fetch a livelihood for their children and wives in the beleaguered coastal enclave.
13 nov 2016
Israeli army conducts small-scale incursion north of Gaza

Local sources told the Palestinian Information Center (PIC) that four army bulldozers came from the military outpost of Zakim and advanced into an agricultural area on the northern border of Gaza.

The sources added that the bulldozers embarked on flattening raised areas before they moved towards the northern border of Beit Hanoun.
Army Fires At Homes, Lands, In Southern Gaza

Israeli soldiers opened fire, on Saturday evening, at several Palestinian homes, and agricultural lands, east of Khan Younis, in the southern part of the coastal region.

The sources added that the soldiers fired many live rounds at the homes, and nearby lands, especially close to the border fence, in southern Gaza.

The Israeli army conducts frequent attacks against the Palestinians, their homes and property, in areas that are close to the border fence, in addition to ongoing attacks, by the navy against the fishers and their boats, in Gaza territorial waters.
12 nov 2016
Israeli army starts two-week drills on Gaza border

The Israeli army’s Bedouin tracker unit started Friday large-scale drills along the border of Gaza aimed at training to detect and deal with tunnels and cross-border infiltration incidents during war-like conditions.

According to the army radio, these  large-scale military drills will last for two weeks along the border with Gaza and simulate the occurrence of underground incursions and fence breaches during a war.

Rabie Sawa’id is the chief tracker who commands a small unit of Negev Bedouin soldiers who use their field craft skills to serve as the Jewish state’s gatekeepers along the Gaza borderline.

He told the radio that almost no operational activity is carried out by the Israeli army on Gaza border without soldiers from his unit being ahead of other patrol troops.

The Israeli army has recently stepped up attempts to recruit soldiers from impoverished Bedouin communities in order to use them as scouts, especially during military advances to protect Israeli troops.
11 nov 2016
4 gunshot injuries reported on Gaza borders

IOF soldiers fired rubber and live bullets at a group of youths who gathered at the eastern outskirts of Gaza City.

A 24-year-old young man was also reportedly shot and injured in his left foot near al-Bureij refugee camp in central Gaza.

The injured young man was transferred to hospital suffering from moderate wounds, the PIC reporter said.

Since the outbreak of Jerusalem Intifada, the eastern border areas of Gaza Strip have seen weekly clashes between local protesters and Israeli forces stationed at the border fence.
10 nov 2016
Israeli Navy Opens Fire On Gaza Fishermen, Soldiers Fire At Farmers

Israeli navy ships opened fire, on Thursday morning, at several Palestinian fishing boats, near Gaza city and in central Gaza, while Israeli soldiers opened fire on farmers in their lands, northeast of Khan Younis, in the southern part of the Gaza Strip.

Eyewitnesses said the Israeli navy ships fired many live rounds at the Palestinian fishing boats, near Gaza city and near the Nusseirat refugee camp, in addition to Deir al-Balah in central Gaza. The attacks led to property damage, but did not lead to casualties.

In addition, soldiers stationed on military towers across the border fence, fired many live rounds at Palestinian farmers, northeast of Khan Younis, forcing them to leave in fear of additional escalation.
9 nov 2016
Israeli Army Invades Farmlands In Khan Younis

Several Israeli military vehicles and bulldozers invaded, on Wednesday morning, Palestinian lands close to the border fence, in Khan Younis, in the southern part of the Gaza Strip, amidst sporadic gunfire to force the residents out of their lands.

Eyewitnesses said two armored bulldozers and five tanks left a military base, across the border fence east of Khan Younis, and advanced more than 150 meters into the Palestinian lands.

The soldiers bulldozed several sections of the invaded lands, and fired many live rounds in the air, and towards some residents, to force them out of their lands.

In invasion is part of ongoing violations carried out by the army against the Palestinians and their lands, in different parts of the besieged and improvised costal region.
8 nov 2016
Israeli Navy Ships Open Fire On Palestinian Fishing Boats In Northern Gaza

Israeli navy ships opened fire, on Tuesday at dawn, on a number of Palestinian fishing boats, in Gaza territorial waters, in the northern part of the coastal region.

The attack led to excessive property damage, while the fishers remained unharmed and sailed back to shore in fear of additional Israeli escalation.

The fishermen in Gaza are subject to daily violations and attacks by the Israeli navy, an issue that led to dozens of casualties, including many fatalities, and numerous arrests.

The navy also frequently confiscates the fishing boats and tows them to the Ashdod Port.

On October 26, Israel announced increasing the fishing zone in Gaza from six to nine nautical miles, but delayed the implementation of its decision three times.

Under the Oslo agreements of 1993, The Palestinians are supposed to be allowed to fish and sail within twenty nautical miles from the coast.
4 nov 2016
Dozens of injuries reported in West Bank, Gaza clashes

In Gaza, two youths were slightly injured in their feet as Israeli forces opened fire at a group of Palestinian youths east of Gaza.

Three people were injured during the raid including an Israeli peace activist.

Several homes were targeted with teargas bombs during the raid, while a local resident was arrested.