The Palestinian Centre For Human Right (PCHR) On Tuesday, 01 November 2016, Israeli gunboats chased and opened fire at Palestinian fishing boats.  They then arrested 6 fishermen, including a child, and confiscated two fishing boats and nets on board.

The Palestinian Center for Human Rights (PCHR) noticed that Israeli forces have recently concentrated their attacks against fishermen in Gaza Sea, denying them access to their livelihood and free fishing in Gaza Sea.

According to PCHR’s investigations, at approximately 09:40, Israeli gunboats stationed offshore, northwest of al-Wahah Resort, northwest of Beit Lahia in the northern Gaza Strip, opened fire at Palestinian fishing boats and then surrounded two of them sailing within 4 nautical miles.

The Israeli naval soldiers ordered the six fishermen to take off their clothes, jump into the water and swim towards the gunboat.  They were then arrested while their boats and 55 nets were kept in custody.

The Israeli occupation forces (IOF) on Tuesday morning carried out a limited incursion into the northern border areas of the Gaza Strip along with a number of military bulldozers.

Local sources told the PIC reporter that three Israeli bulldozers, escorted by a military vehicle, moved from the Zikim military base heading to Beit Lahia town to the north of the Strip.

In violation of the Egyptian-brokered truce agreement with the resistance, the IOF repeatedly carries out incursions into Gaza border areas.
6 Gaza fishermen arrested by Israeli navy

Over recent years, the IOF has stepped up arbitrary abductions and crackdowns against Palestinian fishermen setting sail off the blockaded coastal territory for unknown reasons.
31 oct 2016
4 Israeli military bulldozers roll into southern Gaza

Four Israeli military bulldozers rolled on early Monday morning into the eastern corners of Khan Younis province, to the south of the blockaded Gaza Strip.

One Palestinian fisherman was injured Sunday morning when the Israeli occupation navy opened fire at fishing boats off the coast of the embattled Gaza Strip.

Chief of the fishermen Nizar Ayyash told Quds Press that Israeli troops aboard naval gunboats fired bullets at fishing boats off the northern shore of Gaza.

Ayyash added that one of the young fishermen called Rami Baker suffered a rubber bullet injury in the leg and was evacuated to hospital.

He pointed out that the gunfire attack forced all the fishermen to leave their fishing nets and return quickly to the coast.

In another incident, Israeli border soldiers reportedly opened fire at bird hunters during their presence in the eastern area of Jabalia town, north of Gaza. Luckily, no one was hurt.
Israeli navy attacks Gaza fishermen

The Israeli occupation navy on Saturday evening opened machinegun fire at Palestinian fishermen and their boats off the coast of the Gaza Strip, with no reason.

Local sources said that the gunfire attack forced the fishermen to quickly return ashore, adding that no one was hurt in the shooting.

They added that the fishermen were working within the permitted fishing zone.

The Israeli occupation authority announced recently that it would expand the designated fishing zone off the shores of Gaza for the upcoming fishing season.

The decision will increase the fishing area from six to nine nautical miles, and will go into effect on November 1 and expire about two months later, according to the Israeli media.
29 oct 2016
Army Injures Three Palestinians In Gaza

The Palestinians were marching against the ongoing Israeli attacks and violations, when the soldiers, stationed across the border fence, started firing at them.

Medical sources said two Palestinians were shot east of Gaza city, and one was shot east of the al-Boreij refugee camp. The three suffered moderate wounds and were moved to local hospitals.

Nearly four bulldozers along with a number of military vehicles coming from the Military School site entered and leveled border areas in central Gaza Strip where Palestinian youths gather on Fridays to peacefully protest Israeli violations in occupied Jerusalem.

Israel maintains a "security buffer zone" along Gaza's land and sea border and frequently levels land inside and close to this zone.

Palestinian farmers and fishermen who work near the “buffer zone” often come under Israeli gunfire.
Army Kidnaps A Palestinian In Hebron, Navy Attacks Fishers In Gaza 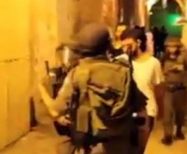 Israeli soldiers invaded, on Thursday, the southern area of Hebron city, in the southern part of the occupied West Bank, and kidnapped one Palestinian. The soldiers also invaded an area east of Tubas, while the navy attacked fishing boats in Gaza waters.

The Hebron office of the Palestinian Prisoners Society (PPS) said the soldiers invaded homes in the southern area of the city and kidnapped Ayman Abdul-Hamid Taha, 33.

In addition, the soldiers invaded Khallet Hamad area, in the West Bank’s Northern Plains area, east of Tubas, and threatened to demolish newly constructed structures, even tents, installed in place of structures the military demolished more than a month ago.

In addition, Israeli navy ships fired many live rounds at Palestinians fishing boats, close to the coast in the northern part of the Gaza strip.
26 oct 2016
IOF limited incursion into blockaded Gaza Strip

No other details were available on the incident.

The incursion and shooting attacks are another chain in the series of Israeli violations of the Cairo-brokered ceasefire deal struck in the wake of the 2014 Israeli offensive on the besieged coastal enclave.
25 oct 2016
Israeli Forces Target Gaza Fishermen and Farmers

On the northeastern borders of the Strip, soldiers opened fire on farmers while in their lands. No injuries were reported.