According to the witnesses, Israeli soldiers stationed in watchtowers near the border fence east of the town of Khuzaa fired gunshots while Palestinian farmers were trying to reach their lands. No injuries were reported.

An Israeli army spokesperson told Ma’an in response to a request for comment that after "suspects reached the border area with Israel, forces fired warning shots into the air and the suspects left the area."

Israeli military incursions inside the besieged Gaza Strip and near the “buffer zone" which lies on both land and sea sides of Gaza, have long been a near-daily occurrence.

Palestinians who work near the “buffer zone” between the Palestinian enclave and Israel often come under fire from military forces, as the Israeli military has not made clear the precise area of the designated zone.

The Israeli army regularly open fires on Palestinian fishermen and farmers along the border areas, despite a ceasefire agreement that ended the 2014 war.

The practice has in effect destroyed much of the agricultural and fishing sectors of the blockaded coastal enclave.
24 dec 2016
Army Injures A Palestinian In Gaza

The sources stated that the soldiers, stationed at the “Nahal Oz” military base across the border fence, east of Gaza, fired many live rounds at protesters, in Palestinian lands.

They added that a young man was shot with a live round in his leg, and described his injury as moderate.
23 dec 2016
IOF opens fire at bird hunters, fishermen in Gaza

The Israeli Occupation Forces (IOF), on Friday morning, opened fire at Palestinian farmers, bird hunters, and fishermen during separate incidents, in the eastern and southern parts of the Gaza Strip.

Israeli forces deployed at the eastern border near the neighborhood of al-Shujayya opened live fire at Palestinian agricultural lands where Palestinian farmers were working on their lands.

Fortunately, there were no reports of casualties.

The bird hunters were forced to leave the area in fear for their lives.

Along the same line, Israeli naval forces opened live fire at Palestinian fishing boats off the coast of Sudaniya area early in the morning.

No injuries were reported during the shooting attack.

Gazans come under daily attack from Israeli army and naval forces, who interfere in their daily quest for livelihood.
21 dec 2016
Israeli Military Opens Fire at Farmers, Fishermen in Gaza

Israeli forces, on Tuesday morning, opened fire at Palestinian farmers and fishermen during separate incidents, in the north and south of the Gaza Strip, local sources said.

Israeli forces deployed at borderline military outposts east of Maghazi refugee camp, in the central Gaza Strip, and east of Khan Younis, south of the Strip, opened fire at farmers who were working on their land, said the sources.

There were no reports of casualties, according to WAFA correspondence, but the farmers left the area in fear for their lives.

Israeli navy forces also opened fire at fishermen sailing off the northern coast of the Strip. No injuries were reported, however.

Residents say that they come under daily attack from Israeli army and naval forces, who interfere in their daily quest for livelihood.

Armed clashes broke out on Monday morning between Israeli Occupation Forces (IOF) and local resistance fighters in Gaza after the IOF carried out an incursion east of Bureij refugee camp in central Gaza Strip.

According to the PIC reporter, three Israeli military jeeps carried out this morning a limited incursion east of Bureij camp, which led to the outbreak of the armed clashes.

During the clashes, Israeli forces shelled the border area.

No injuries were initially reported during the clashes.

Following the confrontation, Israeli forces were deployed in large numbers in the area and carried out combing operations.
Soldiers Abduct A Gaza Merchant At The Erez Terminal

Media sources in Gaza said the abducted merchant has been identified as Hasan Shehada, from Gaza city.

It is worth mentioning that Shehada is the third Palestinian merchant to be abducted by the soldiers in the past five days.

The two other merchants have been identified as Ahmad Khalil and Nofal Abu Sirryya.

Dozens of Palestinians from the Gaza Strip were prevented from reaching Jerusalem to pray in the Al-Aqsa Mosque on Friday.

Israeli authorities claimed that Gazan worshipers do not stick to Israeli instructions saying that they must return to Gaza on the same day.

Meanwhile, dozens of UNRWA employees were allowed to perform Friday prayer in al-Aqsa.

250 of elderly Gazan worshipers used to travel to occupied Jerusalem each Friday to perform prayer in al-Aqsa Mosque.

Israel allows 250 elderly Palestinian worshipers from Gaza to travel through the Erez crossing to pray at the Al-Aqsa Mosque every Friday, on the condition that they return to Gaza on the same day.

Visitations of elderly Palestinians from Gaza were implemented as part of a ceasefire agreement that ended Israel’s 2014 offensive on the besieged enclave.

However, visits have been frequently interrupted since their introduction due to Israeli military restrictions and Jewish holidays.
15 dec 2016
Israeli forces open fire at agricultural lands in southern Gaza

Eyewitnesses told Ma’an that Israeli forces stationed inside a watchtower near the border opened fire in the area, without causing injuries.

An Israeli army spokesperson told Ma’an that they were looking into the reports.

Israeli military incursions inside the besieged Gaza Strip and near the “buffer zone," which lies on both the land and sea sides of Gaza, have long been a near-daily occurrence.

Palestinians who work near the unilaterally declared “buffer zone” between the Palestinian enclave and Israel often come under fire from military forces, as the Israeli military has not made clear the precise area of the designated zone.

The practice has in effect destroyed much of the agricultural sector of the blockaded coastal enclave.
13 dec 2016
Limited Israeli incursion into north of Gaza Strip

The Israeli occupation forces (IOF) on Tuesday morning carried out a small-scale incursion into the northern border areas of the Gaza Strip along with a number of military bulldozers.

The Israeli occupation forces (IOF) on Monday evening opened fire at Palestinian fishermen off the southern shores of Gaza Strip.

According to local sources, Israeli war boats opened their machinegun fire at a number of Palestinian fishing boats off the shores of Khan Younis and Deir al-Balah to the south of Gaza Strip.

Meanwhile, Israeli soldiers opened fire at Palestinian agricultural lands to the east of the Gaza borders.

No injuries were reported during the attacks.

Under an inhumane siege, the Israeli army keeps attacking, injuring and killing civilians, farmers and fishermen in Gaza Strip almost on a daily basis, in flagrant violation of the Egyptian-brokered ceasefire deal in Gaza.
10 dec 2016
Israeli Soldiers Open Fire At Homes, Farmlands, In Khan Younis

Israeli soldiers opened fire, on Saturday morning, at several homes, and into farmlands, east of Khan Younis, in the southern part of the Gaza Strip.

Eyewitnesses said the soldiers, stationed on military towers across the border fence, fired dozens of live rounds at homes, and lands, in Khuza’a neighborhood, east of Khan Younis.

They added that the attack caused property damage, but did not lead to casualties.

The attack is part of daily Israeli violations against the Palestinians, their homes and lands, in different parts of the besieged Gaza Strip, especially in areas close to the border fence, in addition to frequent attacks targeting fishermen and their boats, in Palestinian waters.
8 dec 2016
Israeli navy attacks Gaza fishermen with machinegun

A PIC news reporter said the Israeli gunboats cordoned off Palestinian fishing boats at sea and targeted the fishermen with randomly-unleashed barrages of gunfire.

No injuries were reported in the attack.

Fishing is the sole source of income for 4,000 Palestinian fishermen in the blockaded Gaza Strip.

Israel allows Gazans to set sail within a three-nautical-mile zone only, which does not meet the needs of the fishermen whose survival and their families largely hinges on fishing.
6 dec 2016
Israeli Navy Abducts Four Fishermen In Northern Gaza 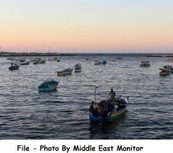 The WAFA Palestinian News Agency said the Israeli navy boats fired many live rounds at the fishing boats, close to the shore in northern Gaza, and abducted the four fishermen.

It added that the abducted fishermen have been identified as Majed Bakr, 55, Omran Majed Bakr, 27, Mohammad Ziad Bakr, 26, and Khali Johar Bakr, 22.

On Monday evening, the soldiers abducted a Palestinian merchant, identified as Hisham Abu Zayed, after interrogating him for several hours while trying to cross the Erez border terminal, in the northern part of the Gaza Strip.

Abu Zayed was returning home when the soldiers abducted him, and was taken to an unknown destination.