Israeli navy ships attacked, on Monday evening, a number of Palestinian fishing boats, in Palestinian territorial water in Beit Lahia, in the northern part of the Gaza Strip, and kidnapped five fishers.

The five were all fishing in the same boat; the navy also confiscated their boat and took it to Ashdod Port.

The attacks are part of frequent Israeli violations against the besieged and improvised coastal region.
Limited Israeli incursion east of Khan Younis

Nearly six Israeli military bulldozers carried out a limited incursion Monday morning into the eastern areas of Khan Younis to the south of Gaza Strip.

Monday's incident came as part of Israeli near-daily violations of the ceasefire agreement reached on August 26, 2014 between Palestinian resistance and Israel to end its 51-day aggression on Gaza.
14 aug 2016
Army Opens Fire On Shepherds, Farmers, In Rafah

Israeli soldiers, stationed across the border fence east of Rafah, in the southern part of the Gaza Strip, opened fire, on Saturday evening, at a number of shepherds and farmers.

The soldiers fired many live rounds at the shepherds and the farmers, forcing them to leave their lands in fear for their lives.

The soldiers were stationed on military towers in the “Sofa” army base, across the border fence, east of Rafah.

The Israeli army frequently attacks the Palestinians in their lands, especially in areas close to the border fence, in addition to the repeated attacks against the fishers and their boats in Palestinian territorial waters in the Gaza Strip.
13 aug 2016
Israeli Army Injures A Palestinian In Gaza

Palestinian medical sources have reported, Friday, that a young man was injured by Israeli army fire, east of the al-Boreij refugee camp, in central Gaza.

The sources said the young man was shot with a live round in one of his legs, while many Palestinians suffered the effects of tear gas inhalation.

The injuries took place during clashes that took place with Israeli soldiers, stationed across the border fence, east of the al-Boreij refugee camp, after the army fired live rounds, rubber-coated steel bullets and gas bombs on protesters close to the fence.

A number of Israeli navy ships attacked, earlier on Friday, a number of Palestinian fishing boats, opened fire on them and kidnapped five fishers, before confiscating their boats.

Zakariyya Bakr, an official in charge of the Fishers Committee of the “Union of Agricultural Workers Committees,” said the navy ships opened automatic fire, approximately at 7 in the morning, targeting several boats in the al-Waha area, north of Gaza city.

Bakr added that the navy then assaulted the fishers, who jumped into the water to avoid the bullets, and kidnapped five of them in addition to confiscating their boats.

Earlier om Friday at dawn, several Israeli navy ships opened fire on a number of Palestinian fishing boats in Beit Lahia and Sudaniyya, in the northern part of the Gaza Strip, and in Rafah, in its southern part.
Israeli Navy Opens Fire On Palestinian Fishing Boats In Gaza

Several Israeli navy ships opened fire, on Friday morning, on a number of Palestinian fishing boats, in Gaza territorial waters, in Beit Lahia and Sudaniyya, in the northern part of the Gaza Strip, and in Rafah, in its southern part.

The fishers said the soldiers fired dozens of live rounds at, and around, the boats, in the Sudaniyya Sea area and Beit Lahia, causing damage, and forcing them back to shore.

In Rafah, in the southern part of the Gaza Strip, the soldiers fired live rounds in a number of boats, in addition to firing a few shells along the shore, causing property damage.

The attacks were carried out as military helicopters flew overhead, and above various parts of the coastal region.
11 aug 2016
Israeli Soldiers Kidnap Two Palestinians In Bethlehem 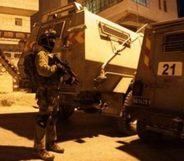 Israeli soldiers invaded, on Thursday at dawn, the West Bank city of Bethlehem, and nearby Beit Fajjar town, broke into and searched a few homes and kidnapped two Palestinians.

The Bethlehem office of the Palestinian Prisoners Society (PPS) said the soldiers invaded Jabal al-Mawaleh area, in Bethlehem city, and kidnapped Soheib Saleh Qassem. 37, after storming his home and searching it.

The PPS added that the army also invaded some homes in Beit Fajjar town, south of Bethlehem, and kidnapped Hani Mahmoud Deeriyya, 18.

The soldiers cuffed and blindfolded the two kidnapped Palestinians, and took them to Etzion military base and security center, south of Bethlehem.

No casualties have been reported. The heavy shooting forced the Gazan fishermen to return to shore and end fishing despite sailing within the allowed zone of 12 nautical miles.

In a similar context, eyewitnesses revealed that Israeli troops opened fire at a group of Palestinian farmers east of Central Gaza. No casualties have been reported; however, the farmers had to stop working in their lands to avoid Israeli shooting.

Nizar Ayyash, head of the Palestinian fishermen syndicate in Gaza, said that Israeli forces have intensified their arrest and boat confiscation campaigns against Gazan fishermen over the past few weeks.

In an exclusive statement to the PIC, Ayyash elaborated that Israeli navy forces have arrested 80 fishermen and confiscated 21 boats of different sizes since the beginning of last April.

He pointed out that Israeli troops have been waging repeated arrest campaigns since the Israeli aggression on Gaza in 2014 was over in full violation of the ceasefire agreement with the Palestinian resistance stipulating for allowing Gazan fishermen to sail within 12 nautical miles.
7 aug 2016
Israeli Army And Navy Attack Farmers And Fishers In Khan Younis

Israeli soldiers and Navy opened fire, on Sunday morning, targeting several Palestinian farmers on their lands, close to the border fence, and fishers in Palestinian territorial waters, in Khan Younis, in the southern part of the Gaza Strip.

The WAFA Palestinian News Agency said the soldiers, stationed in military towers across the border fence, east of Khan Younis, fired many live rounds at the farmers, forcing them to leave, and preventing others from reaching their lands.

There have been no reports of casualties in the attack, but the fishers sailed back to shore fearing additional escalation.
5 aug 2016
Six Palestinians Injured, One Seriously, By Israeli Army Fire In Gaza

Israeli soldiers shot and injured, Friday, six Palestinians with live fire, causing various wounds, including one who suffered life-threatening wounds, after the army opened fire on protesters, in two areas in the besieged Gaza Strip.

Dr. Ashraf al-Qedra, the spokesperson of the Ministry of Health in Gaza, said that five Palestinians were shot and injured with live rounds, including one, 25 years of age, who suffered life-threatening wounds, after the soldiers fire many bullets at protesters, east of Gaza city. Another Palestinian suffered moderate wounds.

Dr. al-Qedra added that one Palestinian, 21 years of age, suffered moderate wounds after the soldiers shot him with a live round, east of Gaza city.

At least three Palestinians were shot with rubber-coated steel bullets, and scores suffered the effects of tear gas inhalation.

At least five Palestinians were shot and injured by the Israeli occupation forces (IOF) on Friday evening in the blockaded Gaza Strip.

Spokesperson for the Palestinian Health Ministry Ashraf al-Qudra said five youngsters sustained serious injuries, including one in critical condition, after they were attacked by the IOF in al-Shuja’iya neighborhood, to the east of Gaza, and in al-Bureij refugee camp, in central Gaza Strip.

A 25-year-old Palestinian sustained serious wounds in the assault. The IOF opened fire on a group of Palestinian youths who peacefully gathered near the Nahel Oz military camp.

Reporting from central Gaza Strip, a PIC journalist said two protesters were rushed to the Shuhadaa al-Aqsa hospital so as to be treated for the wounds they sustained in a shooting attack on peaceful protesters in eastern al-Bureij refugee camp.
3 aug 2016
IOF arrests youth for trying to cross Gaza border fence

Quds Press quoted local sources as saying that an unarmed young man in his twenties tried to cross the border fence to the east of Breij refugee camp in central Gaza Strip but was detained by IOF soldiers.

They said that the soldiers fired at the young man but did not hit him, then ordered him to strip under gun threat before taking him away to an unknown location.

Infiltration attempts from the blockaded enclave into 1948 occupied Palestine had increased as of late looking for jobs. Dozens of young Gazans were rounded up since the start of 2016.

A number of Israeli military vehicles, and bulldozers, carried out on Wednesday morning a limited invasion into Palestinian farmlands, northeast of Khan Younis, in the southern part of the Gaza Strip.

Media sources in Khan Younis said four D9 armored military bulldozers and several others vehicles invaded the lands through the Kissufim military base gate, across the border fence, east of Khan Younis.

They added that the soldiers and military engineers conducted land surveying, and bulldozed some sections, before withdrawing.

The invasion is part of repeated violations carried out by the Israeli army against border areas in the besieged coastal region, in addition to frequent attacks against Palestinian fishers in Gaza territorial waters.
1 aug 2016
Commemoration of the 2nd anniversary of the martyrdom of 17 pressmen

Dozens of Palestinian Journalists and pressmen participated in the sit-in before the Office of the High Commissioner in Gaza, in order to commemorate the second anniversary of the martyrdom of 17 of their colleagues in the Israeli aggression on Gaza in summer 2014.

The media forum which called for the event urged for supporting the families of martyrs and offering them a decent life in loyalty to their sons.

It also called for prosecuting Israeli criminals at international courts for killing Palestinian journalists and targeting their offices throughout the past years.

Speakers at the sit-in demanded expelling Israelis from the international forums which are concerned with the freedom of journalism and pressmen.