According to the PIC reporter, Israeli tanks stationed along the borders of Gaza shelled an site used by Palestinian resistance east of the Maghazi refugee camp, without causing any injuries.

The Israeli army shelled a site allegedly used by Palestinian militant groups in the central Gaza Strip, on Thursday, after a rocket reportedly fired from the Gaza Strip hit an “open” area of southern Israel.
Editor’s note: Default resistance rockets are typically constructed of little more than a hollow tube stuffed full of dynamite. They are not equipped with guidance systems and, typically, fall into unpopulated regions of the Negev Desert, in Southern Israel.

Israeli military vehicles stationed along the border between Gaza and Israel were said to have shelled an area east of the Maghazi refugee camp, without causing any injuries.

An Israeli army spokesperson told Ma’an News Agency that they were “looking into the reports”.

Earlier in the day, an Israeli army spokesperson said that a rocket fired from the Gaza Strip hit an open area designated as the “Eshkol regional council”, causing no injuries.

The shelling and rocket came a day after another rocket hit Israel and the Israeli army launched airstrikes in the besieged Palestinian territory.
Israeli airstrikes and artillery shells hit multiple targets in the blockaded Gaza Strip on Wednesday, after a rocket reportedly  fired from the blockaded Gaza Strip landed on a road inside the Israeli city of Sderot, earlier that day.

No injuries were reported on either side. The Salafist group Ahfad al-Sahaba reportedly claimed responsibility for Wednesday’s rocket fire.

The Israeli army has previously said it holds the Hamas movement — the de facto rulers of the Gaza Strip — responsible for all attacks from the territory, although other Palestinian militant groups are active in the small coastal enclave.

The Palestinian Authority (PA), meanwhile, condemned Israeli shelling in Gaza, calling on the international society to quickly intervene to stop Israeli aggressions on Gaza and force Israel to end its near decade-long siege on the small Palestinian territory.

Hamas spokesman Sami Abu Zuhri condemned, on Wednesday, the Israeli attacks on the besieged enclave, saying that Hamas could not “stand by idly” if Israel continued its escalation and called upon the international community to stop Israel’s aggression in Gaza.

Meanwhile, an Israeli army air force pilot died and another was injured on Wednesday, as their fighter jet crashed while returning from carrying out airstrikes in Gaza.

The cross-border incidents are the latest to occur since Israeli forces carried out several airstrikes on the besieged Gaza Strip in mid-September, after a rocket was launched from Gaza and exploded in an open area in southern Israel. No injuries were reported.

September’s airstrikes came as the second wave of Israeli shelling to strike the besieged Gaza Strip in the span of a month, while a few weeks earlier the Israeli army fired missiles into the northern Gaza Strip town of Beit Hanoun that left at least five Palestinians injured in late August, after a rocket fired from Gaza fell inside Sderot, with no injuries or damage reported by the Israeli army.

On July 1, Israeli forces launched airstrikes at several sites allegedly used by Palestinian factions in the besieged coastal enclave in response to a rocket fired from Gaza which landed in Sderot.

In May, a Palestinian woman was killed during several consecutive days of sustained airstrikes and tank shelling from Israeli forces, allegedly in response to cross-border mortar shelling and a rocket being fired from the Gaza Strip.

The majority of the more than 1.8 million Palestinians in the Gaza Strip are sealed inside the coastal enclave due to a near-decade long military blockade imposed by Israel and upheld by Egypt on the southern border.

The crippling blockade was imposed following the victory of Hamas in the 2006 Palestinian elections and the subsequent 2007 clashes between Fateh and Hamas, which left Hamas in control of the Gaza Strip and Fatah in control of the occupied West Bank.
Limited Israeli incursion in southern Gaza

A number of Israeli military vehicles carried out Thursday morning a limited incursion into east of Rafah to the south of the besieged Gaza Strip.

Eyewitnesses affirmed to the PIC reporter that the military vehicles carried out combing operations in the area amid heavy flight of Israeli aircrafts. 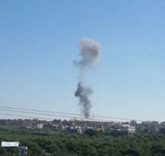 For the second time in just a few hours, The Israeli Air Force and army fired several shells and missiles, on Wednesday, targeting various areas of the Gaza Strip, after a shell was fired earlier into Sderot, in the Negev.

The Israeli Air Force fired at least one missile into the Naval Police base, northwest of Beit Lahia, in the northern part of the Gaza Strip, causing excessive damage.

Another missile struck an agricultural land, close to a gas station, also in northern Gaza, and twice targeted with artillery shells an open area, east of Gaza city.

In addition, the army missiles into a training site for the Al-Qassam Brigades of Hamas, west of Khan Younis, in the southern part of the Gaza Strip.

Also Wednesday, the army fired artillery shells into a camp run by the Al-Qassam Brigades, east of Beit Hanoun, in northern Gaza.

Dr. Ashraf al-Qedra, the spokesperson of the Health Ministry in Gaza, said the attacks did not lead to casualties.
IOF shell targets in northern Gaza

Eyewitnesses affirmed that the shelling targeted a resistance training site east of Beit Hanoun north of Gaza. No injuries were reported during the attack.

On the other hand, Israeli sources claimed that two Israeli settlers have been treated for shock after a rocket fired from Gaza Strip landed in Sderot. Sderot Mayor Alon Davidi told Yediot Ahranot Hebrew newspaper that the rocket fell next to his house.

Palestinian resistance factions did not confirm or deny firing the rocket.

Israeli soldiers fired, on Wednesday at noon, an artillery shell into a site run by the Al-Qassam Brigades, the armed wing of Hamas, east of Beit Hanoun town, in the northern part of the Gaza Strip. The army said it was retaliating to a shell fried from Gaza.

The shell into the Qassam site caused property damage but no injuries, media sources in Gaza said.

The Israeli army said the bombarded took place after a shell was fired from Gaza into Sderot town, in the Negev.

Israeli Ynet News said the shell caused no property damage, while a 15-year-old girl and a 60-year-old man “were treated for shock before they were moved to Barzelai Medical Center in Ashkelon.”

Earlier Wednesday, the Israeli army and navy opened fire on Palestinian fishers in Gaza territorial waters, and farmers in their lands, in the besieged Gaza Strip.
Israeli Soldiers, Navy, Open Fire On Fishers, Farmers And Shepherds In The Gaza Strip

Media sources in Gaza have reported that an Israeli tank fire one shell into a Palestinian agricultural land, east of the Zeitoun neighborhood in Gaza city.

They added that soldiers stationed on military towers in the Nahal Oz base, fired many live rounds at farmers and shepherds east of the Sheja’eyya neighborhood, east of Gaza city.

In addition, navy shops fired many live rounds at fishing boats in the Sudaniyya area, northwest of Gaza City, causing damage, and also forcing the fishers back to shore.

A similar attack targeted many fishing boats near Khan Younis, in the southern part of the coastal region, causing property damage.

The shepherds and farmers had to run out of their own lands, while the fishers sailed back to shore in fear of additional escalation.

The Israeli army and navy carry out frequent attacks against workers, famers and shepherds, especially near border areas, in the northern and eastern parts of the besieged and improvised coastal region, in addition to ongoing attacks against the fishers in Palestinian territorial waters.
1 oct 2016
Israeli Army Injures Five Palestinians In Gaza

The sources stated that the soldiers, stationed on military towers in Nahal Oz base, across the border fence east of Gaza city, fired many live rounds on Palestinian youngsters protesting close to the border fence, wounding three.

The three wounded Palestinians were shot in their lower extremities, and suffered moderate injuries, before local medics moved them to the Shifa Hospital.

Clashes also reported east of the al-Boreij refugee camp, in central Gaza, while the soldiers fired live rounds, moderately wounding two Palestinians in their legs, before they were moved to the Al-Aqsa Hospital in Deir al-Balah nearby city.
30 sept 2016
Palestinian Killed, Three Injured, While Trying To Defuse Israeli Missile

The Palestinian Health Ministry in the Gaza Strip has reported that one Palestinian was killed, on Thursday evening, and three others were injured, while trying to defuse an Israeli missile, in Beit Hanoun, in the northern part of the coastal region.

Dr. Ashraf al-Qedra, the spokesperson of the Palestinian Health Ministry in the Gaza Strip, said the young man has been identified as Ahmad As’ad Meit, 30.

Al-Qedra added that Meit was killed, and three other Palestinians were injured, after inhaling chemicals and gas released by one of the unexploded Israeli missiles.

The incident took place as many Palestinian experts, including fighters, have recently been trying to remove and safely defuse unexploded Israeli missiles that were fired during the 2014 Israeli aggression on the coastal region.

The Israeli missiles and shells also completely destroyed 2358 homes, and partially damaged 13644 homes that have been rendered unsafe for inhabiting.

All destroyed, and damaged, buildings and homes remain in rubble due to the ongoing Israeli siege on the improvised coastal region.
29 sept 2016
Israeli Soldiers Open Fire On Palestinian Farmers In Central Gaza

Israeli soldiers opened fire, on Thursday morning, on several Palestinian farmers, working on their own lands, east of Deir al-Balah, in central Gaza.

The farmers said the soldiers, stationed across the border fence, fired many live rounds, forcing them to leave their lands in fear of additional escalation and army fire.

The soldiers attacked the farmers while stationed on their military towers, across the border fence surrounding the Kissufim army base, southeast of Deir al-Balah.

The attack is part of frequent violations targeting Gaza farmers, working and fishers, in different parts of the besieged and impoverished coastal region.
26 sept 2016
Army Opens Fire On Palestinians Lands And Homes In Gaza; Navy Fires On Fishing Boats

Israeli soldiers, stationed across the border fence with Gaza, opened fire into Palestinian lands and a number of homes in Khan Younis, in the southern part of the Gaza Strip. Navy ships also fired on fishing boats near the Gaza shore.

Media sources said the soldiers, stationed on military towers across the border fence, east of the Gaza Strip, fired several live rounds into the lands, and homes, in Khan Younis.