Israeli and Egyptian gunboats on Saturday opened machinegun fire at Palestinian fishermen off the northern and southern shores of the Gaza Strip.

According to Quds Press, the Israeli navy opened fire at Palestinian fishermen off the coast of Gaza City.

Simultaneously, a similar gunfire attack was carried out by Egyptian naval troops off the coast of Rafah, north of Gaza.

The Egyptian navy had opened fire several times before at Palestinian fishermen, with no reason. Luckily, none of the fishermen was hurt in the shooting attacks.
23 sept 2016
Four young protesters wounded by Israeli gunfire east of Gaza

Four Palestinian young men on Friday afternoon suffered bullet injuries, two of them seriously, when Israeli soldiers opened fire at them in different border areas east of the Gaza Strip.

Four young men were wounded by Israeli gunfire during skirmishes with soldiers east of al-Bureij and near Nahal Oz crossing.

A Palestinian child died in the blockaded Gaza Strip at dawn Friday while his father and sister were left wounded when a roof of the family home collapsed over their heads.

A PIC news correspondent said five-year-old Bilal Merish was instantly killed in the collapse of a tin roof while his father and sister sustained injuries.

The casualties’ home is located in al-Shuja’iya neighborhood, in eastern Gaza City, an area where hundreds of Palestinian civilian homes were destroyed by an Israeli military offensive in the summer of 2014.

Several other homes are expected to collapse as a result of the serious damage inflicted by Israeli shelling.
IOF opens fire at shepherds in central Gaza

On a near-daily basis, Israeli forces target Palestinian fishermen, farmers, and shepherds entering the Israeli-enforced “buffer zone” on land and sea, implemented after Israel imposed a blockade on the Gaza Strip nearly a decade ago.
21 sept 2016
Army Opens Fire at Palestinian Homes East of Khan Younis

Israeli soldiers stationed at a military check point opened fired, heavily and repeatedly, at houses in the area. No Injuries were reported.

There were farmers working on their farms in the area when the shooting occurred.

Meanwhile, according to WAFA, Israeli naval boats attacked Palestinian fishermen with gunfire, late Tuesday evening, despite their sailing within the designated fishing zone off the Gaza shore.

The Israeli army and navy routinely open fire at Palestinian fishermen and farmlands along the Gaza border, in a blatant violation of a ceasefire deal reached between Israel and the Palestinian factions in Gaza on August 26, 2014 following 51 days of bloody aggression on the Strip.
20 sept 2016
Gaza: Israeli army carries out mock air raids, limited incursion

The Israeli occupation army on Tuesday morning carried out mock aerial attacks on different areas of the Gaza Strip as well as a small-scale incursion into an eastern border area.

According to the Palestinian Information Center (PIC) reporter in Gaza, several F-16 jet fighters overflew Gaza at low altitudes and carried out mock airstrikes by causing sonic booms and firing missiles into the sea.

Explosions were heard throughout Gaza as a result of these air raids, which are believed to be part of military maneuvers.

In a related incident, five Israeli armored bulldozers infiltrated in the morning into a border area east of Khuza'a town, south of Gaza, and embarked on leveling a tract of land.

Tanks and other military vehicles were also seen deployed along the borderline of the town in order to provide protection for the bulldozers.
Fisherman injured by Israeli gunfire north of Gaza

A Palestinian fisherman was wounded on Monday evening when the Israeli occupation navy opened fire at him as he was working aboard his boat off the northern coast of the Gaza Strip.

He was rushed by fellow fishermen to a local hospital. The fisherman was identified as 29-year-old Ahmed Zayed.

Despite the Egyptian-brokered ceasefire deal between Israel and the Palestinians following the 2014 war, Gaza fishermen are still vulnerable to frequent gunfire attacks and harassment by the Israeli navy.
17 sept 2016
Israeli Army Injures Three Palestinians With Live Fire In Gaza

The soldiers, stationed across the border fence near Nahal OZ military base, east of Gaza city, fired many live rounds at scores of young men protesting in an area close to the border fence, wounding a young man in his leg.

The soldiers also fired many gas bombs, causing scores of residents to suffer the severe effects of teargas inhalation.

In addition, soldiers stationed in a military base, across the border fence, east of the al-Boreij refugee camp in central Gaza, fired many live rounds at Palestinian protesters, wounding one in the arm and another in his thigh.

Both were moved to the Al-Aqsa hospital in nearby Deir al-Balah town, suffering moderate wounds.
16 sept 2016
Israeli incursion into Gaza Strip

Two Israeli bulldozers Thursday afternoon entered the eastern part of al-Bureij in central Gaza Strip and proceeded to level lands near the border.

The incursion is another episode in the series of Israeli daily violations of the Cairo-brokered truce accord signed in the wake of last summer’s offensive on the besieged coastal enclave, which killed over 2,300 Palestinians, mostly civilians.
15 sept 2016
Army Bombards Several Areas In Gaza

The Israeli Air Force fired, on Thursday at dawn, a number of missiles into several areas, believed to be run by the Al-Qassam Brigades of Hamas, in different parts of the Gaza Strip.

Some of the missiles detonated in open lands in a Qassam site, in the Shaima’ area, northwest of Beit Lahia in the northern part of the Gaza Strip. The Al-Qassam Brigades said the missiles caused property damage, and fires, but did not lead to any casualties.

The Israeli army said it targeted the Qassam centers in Gaza after a mortar shell landed in an open area in the Eshkol Regional Council, on Wednesday evening, and that the shell caused no casualties or property damage.
14 sept 2016
Israeli Soldiers Invade Palestinians Lands In Southern Gaza 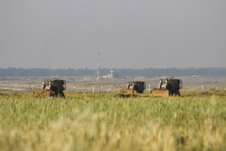 A number of armored Israeli military vehicles invaded, on Wednesday morning, Palestinian agricultural lands, east of Rafah city, in the southern part of the Gaza Strip.

They added that the vehicles came from the Sofa military base, advanced approximately 50 meters, and bulldozed lands close to the border fence.

The invasion is part of frequent Israeli violations against the Palestinians and their lands in the besieged coastal region.
12 sept 2016
Israeli Soldiers Invade Agricultural Lands In Northern Gaza 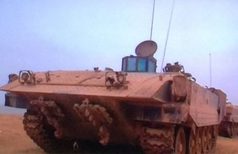 Several armored Israeli military vehicles and bulldozers invaded, on Monday morning, Palestinian agricultural lands, north of Beit Lahia, in the northern part of the Gaza Strip, bulldozed some of them and installed sand hills, in addition to firing live rounds.

The soldiers advanced more than 150 meters into the Palestinian lands amidst sporadic gunfire, and started bulldozing some of them close to the border fence, and installed sand hills.

WAFA added that military drones flew overhead while the soldiers invaded the lands and bulldozed them.

The invasion is part of daily violations against the Palestinians, their homes and lands, in different parts of the besieged and improvised coastal region, and are frequently accompanied by assaults targeting Gaza fishers and their boats.
11 sept 2016
Israeli Forces Open Fire Toward Palestinian Homes along Gaza Border

Israeli armed forces, on Sunday, opened heavy machine gunfire toward Palestinian homes along the borderline area to the east of Khan Younis, in the southern Gaza Strip, said sources.

Israeli forces stationed at military watchtowers along the borders with Israel opened indiscriminate fire at Palestinian homes to the east of the town of Khaza’a. However, no injuries were reported, according to WAFA correspondence.

Israeli army and navy forces routinely open fire at Palestinian fishermen and farmlands along the Gaza border, in a blatant violation of a ceasefire deal reached between Israel and the Palestinian factions in Gaza on August 26th 2014 following 51 days of bloody aggression on the Strip in the summer of 2014.

In its weekly report on Israeli human rights violations in the occupied Palestinian Territories, the Palestinian Center for Human Rights (PCHR) said the illegal closure, which has been steadily tightened since June 2007 has had a disastrous impact on the humanitarian and economic situation in the Gaza Strip.

For nine consecutive years, Israel has tightened the land and naval closure to isolate the Gaza Strip from the West Bank, including occupied Jerusalem, and other countries around the world,” said PCHR.

“This resulted in grave violations of the economic, social and cultural rights and a deterioration of living conditions for 1.8 million people,” it added.

Israeli soldiers invaded, on Sunday at dawn, the towns of Beit Fajjar, south of Bethlehem, and Ethna, west of the southern West Bank district of Hebron, searched homes and kidnapped two Palestinians.

The soldiers also opened fire on farmers and homes, in the southern part of the Gaza Strip.

Several military vehicles invaded Beit Fajjar before the soldiers broke into a number of homes, and searched them, and kidnapped a young man, identified as Mahmoud Abdullah Taqatqa.

In related news, soldiers stationed on military towers across the border fence opened fire on Palestinian farmers in their lands, east of Khuza’a town, east of Khan Younis, in the southern part of the Gaza Strip.