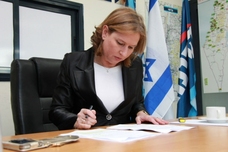 For the fourth time in seven years, the British government has intervened to protect Tzipi Livni, Israel’s former foreign minister, from a possible a war crimes investigation into her role in Israel’s attack on the Gaza Strip in December 2008.

Last week, ahead of her planned trip to London for a conference organized by the Tel Aviv newspaper Haaretz, Scotland Yard’s War Crimes Unit telephoned Livni to invite her to come in for a voluntary police interview.

After receiving the summons, Israel initiated “diplomatic contact” with Britain, according to Haaretz, and the UK’s Foreign Secretary arranged for Livni to receive, once again, the status of a “special diplomatic assignment.”

The police summons was prompted by the police and Crown Prosecution Service’s review of a war crimes complaint that was originally filed in 2009, Daniel Machover, an attorney representing litigants in the case, told The Electronic Intifada. But the UK government has repeatedly intervened to prevent the case from advancing.

Machover lamented “the apparent ease” with which the British government seeks “to interfere with due process by classifying otherwise private visits of suspects from ‘friendly countries’ as ‘special missions’ with a view to providing such suspects with immunity.”

The complaint was lodged by Palestinian victims of Israel’s three-week attack. They are represented by the London-based law firm Hickman and Rose, for which Machover works, and the Gaza-based Palestinian Center for Human Rights.
4 july 2016
Rights group lashes out at UK gov’t for granting impunity to Livni

The Arab Organization for Human Rights (AOHR) in the UK slammed on Monday the British government for granting diplomatic immunity to the former Israeli foreign minister Tzipi Livni.

According to a statement by the AOHR, Livni was summoned for interrogation by the British major crimes unit on June 30 over war crimes committed in 2008.

Livni was expected to travel to the British capital to participate in a conference organized by the Israeli daily Haaretz.

Fearing a legal action during her visit, the Israeli government reacted immediately and contacted the British government to obtain assurances that she could travel freely to London without further hindrance.

The Israeli government intervention got a formal guarantee from the British government, who gave the visit a "Special Diplomatic Mission" status.

AHOR said the British police should have waited until Livni enters the British territories and arrest her, as it is unusual to warn a wanted suspect of his detention beforehand.

“Such a measure breaches international immunity laws,” the statement read. “The move gives a boost to the impunity granted to Israeli leaders despite the horrendous war crimes they have committed over the decades.”

The organization called on the British government to observe immunity laws, assume its international duties, and respect the British national law.

AOHR slammed Britain's policy of double standards, saying the British government failed to arrest Israeli leaders while it had done every possible effort to arrest Sheikh Raed Salah in London.

Livni is convicted of war crimes committed in the 2012 Israeli offensive on Gaza, which took away the lives of 1,500 Palestinians, including 300 children, and left over 5,000 others injured.
Tzipi Livni Refuses Police Interview In Relation To War Crimes Investigation; British Government Provide Last-minute Immunity

Scotland Yard’s War Crimes Unit transmitted a letter to the Israeli Embassy in London last week inviting Ms. Tzipi Livni to a police interview under caution in relation to her role in Israel’s 2008-2009 offensive on the Gaza Strip (Operation ‘Cast Lead’).

At the time of the offensive, Ms. Livni was Minister for Foreign Affairs and a member of the Security Cabinet.

Press Release By The Palestinian Centre For Human Rights (PCHR)

Ms. Livni is suspected of having committed war crimes during Operation Cast Lead. In 2009, a British judge issued a warrant for her arrest with regard to those suspected war crimes.

Ms. Livni is currently visiting the United Kingdom in a private capacity, to participate in a conference organised by an Israeli newspaper. Livni chose not to be interviewed by the police.

Despite media reports that Ms Livni claims to be “proud” of her actions as a member of the Israeli Government, it is notable that she refused the opportunity to clarify her position with regard to the offences she is accused of having committed, to assist the police in their enquiries, and to respect the British legal system.

Instead, she chose to actively undermine due process and the rule of law, and to place herself above the law.

Media reports state that, upon receiving the invitation for interview, senior Israeli officials immediately contacted their British counterparts, in an attempt to classify Ms Livi’s visit as a ‘Special Mission’ involving diplomatic contacts even though Ms Livni holds no official position other than being a member of the Israeli Parliament in the main opposition party bloc.

The British Foreign & Commonwealth Office decision to recognise Ms. Livni’s visit as a Special Mission is a purported attempt to protect her from arrest and prosecution. The British Government needs to answer for this extraordinary interference with due process on the part of the police and DPP.
The granting of Special Mission immunity in this instance is unwarranted and inappropriate.

The Convention on Special Missions states that: ‘a “special mission” is a temporary mission, representing the State, which is sent by one State to another State with the consent of the latter for the purpose of dealing with it on specific questions or of performing in relation to it a specific task.’

There is no evidence that Ms. Livni’s visit satisfied the requirements of the Convention on Special Missions. She is visiting the United Kingdom in her private capacity in order to attend a conference organised by a newspaper.

It is reported that a meeting with Government officials has been scheduled only after Scotland Yard’s invitation to interview her, which can only have been a calculated interference in due process on the part of the police, organised solely to facilitate the granting of immunity during her visit here.

The inappropriate last-minute grant of Special Mission immunity, and Ms. Livni’s refusal to cooperate with the police, directly undermines the rule of law.
Regrettably, this appears to be part of a broader trend whereby Israeli officials suspected of committing war crimes are granted political cover, in order to shield them from investigation and accountability.

War crimes are amongst the most serious crimes known to the international community, and are universally condemned. Since the Nuremberg trials it has been recognised as a fundamental principle of international law that all those suspected of committing war crimes should be investigated and, if appropriate, prosecuted, irrespective of their political or military rank.

By ratifying the Geneva Conventions of 1949 both the United Kingdom and Israel accepted the obligation to seek out and prosecute suspected war criminals, irrespective of the place of commission of the crime or the nationality of the perpetrator.

Since the Nuremberg trials it has been recognised as a fundamental principle of international law that all those suspected of committing war crimes should be investigated and, if appropriate, prosecuted, irrespective of their political or military rank.

By ratifying the Geneva Conventions of 1949 both the United Kingdom and Israel accepted the obligation to seek out and prosecute suspected war criminals, irrespective of the place of commission of the crime or the nationality of the perpetrator.

Respect for the rule of law demands that these investigations and prosecutions be conducted independently and impartially. If the rule of law is to have meaning, it must not be subject to arbitrary political interference.

Ms. Livni should not be able to frustrate the criminal process by being granted exceptional immunity on the basis of either her former political office, or her political connections. It is clear that Ms. Livni has a case to answer.

A warrant for her arrest was issued in the United Kingdom in 2009 but withdrawn when it became clear she was no longer in the jurisdiction.

This is not a political issue. It is a matter of justice, of respect for victims’ rights, and of the straightforward impartial application of the rule of law. The British Government should not undermine the rule of law through political interference. What message does this send to the world?

The United Kingdom must not become a safe haven where suspected war criminals can escape justice by means of political interference in the legal system.

The British people should not allow their legal system to be abused in this manner. As representatives of the victims, our request is simple: apply the law in an independent and impartial manner.

The Palestinian Centre for Human Rights represents victims of war crimes and other violations of international law. Among other victim’s families they act on behalf of Abed Rabbu Ashour Ahmed Al-Ghefari who is a Palestinian policeman. His brother Na’im Ashour Al-Ghefari died with more than 60 other civilian police officers and trainees when the police compound in Gaza City was bombed by Israeli war planes on 27 December 2008 while  a graduation ceremony of police cadets was taking place.

His brother Na’im Ashour Al-Ghefari died with more than 60 other civilian police officers and trainees when the police compound in Gaza City was bombed by Israeli war planes on 27 December 2008 while  a graduation ceremony of police cadets was taking place.
3 july 2016
UK Police Summon Livni Over Suspected War Crimes (VIDEO)
A senior official in Jerusalem, speaking on condition of anonymity, told Haaretz that, on Thursday, the Israeli Embassy in London received a letter from the Scotland Yard’s war crimes unit, which it asked to deliver to Livni. The letter noted that the British police was aware that Livni is expected to arrive in London during the weekend and, therefore, is requested to go to the police station for questioning.

The questioning was meant to discuss Livni’s involvement in committing war crimes and violations of the Geneva Conventions, as the foreign minister and deputy prime minister, and as a member of the diplomatic-security cabinet during the 2008 Cast Lead operation in Gaza.

The Palestine Forum in Britain condemned on Thursday the crimes, terrorism, and massacres perpetrated by the Israeli occupation against the Palestinians across the occupied territories.

The Palestine Forum reiterated, in a statement issued on the occasion of the 7th anniversary of the 2008 Israeli offensive on Gaza, the Palestinians' insistence on their legitimate right to resist the Israeli occupation, liberate the land, defend the holy sites, and establish an independent Palestinian state with Jerusalem as its capital.

The statement spoke out against Israel’s demolition of Palestinian civilian homes and destruction of civilian infrastructure and cultivated land lots.

“The farms, agricultural structures, medical facilities, industrial equipment, and even the mosques and tombs have been plagued by Israeli terrorism,” the statement read.

The forum pushed for impeaching the Israeli army commanders and bringing them before international courts for war crimes against the Palestinians.

The group further condemned the Israeli siege on Gaza, dubbing it a crime against humanity.

The forum called for lifting the siege so as to grant the free access of Palestinian passengers and construction material into the blockaded Strip and press ahead with reconstruction projects.

The Palestine Forum urged the British government, the international community, and the United Nations to urgently step in and take serious measures to stop the Israeli violations in Occupied Jerusalem and the Occupied West Bank and work on defending the Palestinian people against Israeli aggression.

The statement further urged all Palestinian factions and leaders to prop up the underway anti-occupation intifada (uprising) and stand up for Palestinians’ rights to live freely and independently.